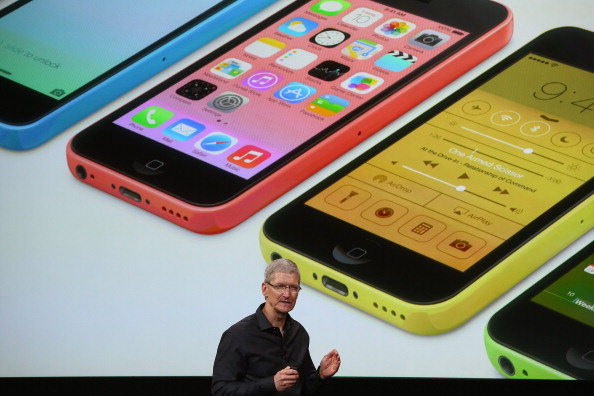 Apple finally unveiled its latest flagship handset, the iPhone 5S, during a media event in Cupertino, California on Tuesday. As the rumours anticipated, the new generation iPhone was accompanied by a cheaper and colourful model, the iPhone 5C.

The next generation iPhone is basically an improvement over its predecessor, the iPhone 5, and comes with better specs and a fingerprint sensor.

While the chassis is largely the same, the iPhone 5S has a brushed aluminum backside that comes in three different colours – white, gold and gray.

The new handset also includes a A7 64-bit chip, which makes the phone up to twice as fast as the previous-generation system and 40 times faster than the first iPhone model, according to Apple. The phone, which runs on Apple’s new iOS 7, also includes a new ‘motion co-processor’ chip named the M7.

The iPhone 5S’s camera has also been improved, with a 15 per cent larger sensor, an f/2.2 aperture lens and better lighting adjustment settings. A new slow-motion mode also enables the phone to record 720p HD video at 100 frames per second.

Another new feature is ‘Touch ID’, a fingerprint sensor that works via a stainless steel detection ring that is set around the home button. The sensor can be used to unlock the phone and purchase items from iTunes.

UAE tech enthusiasts can expect its arrival in the emirates before the end of the year.

During the event, Apple also revealed its first budget gadget, the iPhone 5C. Priced at $99 for the 16GB version and $199 for the 32GB device in the US, the phone will also be available from September 20.

Launching the phone, Phil Schiller, head of marketing said: “The iPhone 5C is made with all the incredible technology that customers have loved with the iPhone 5, but there’s more, too… It has an incredible new design – one that’s more fun, and more colorful than anything we’ve made before.”

The iPhone 5C comes in five colours including green, pink, yellow, blue and white. It runs on iOS 7 and comes with Apple’s older A6 processor, an 8MP camera, a hard polycarbonate casing and a better battery capacity than the iPhone 5.

iPhone 5S Expected To Launch In UAE By Year-End
Timeline: The Apple iPhone From Origin To iPhone 5S