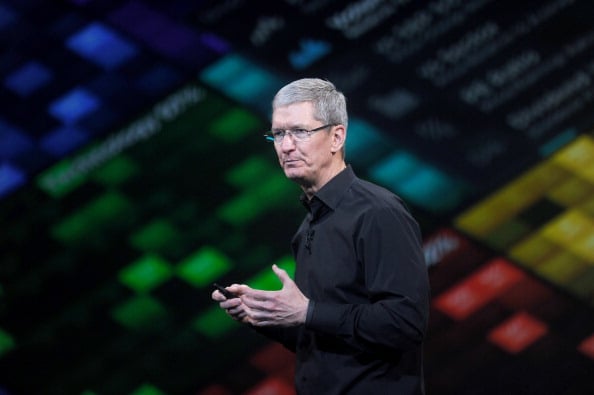 Apple Inc sold more than $1 billion of Apple TV set-top boxes in 2013 and is investing heavily in the next generation of products, CEO Tim Cook said at the company’s annual meeting on Friday.

Apple’s ability to again transform the fast-moving technology arena is the central question in investors’ and Silicon Valley executives’ minds as the company’s growth slows, and rivals like Samsung Electronics Co Ltd and Google Inc take chunks out of its market share.

Industry executives and Apple observers continue to believe that the company will come up with some sort of wearable device, like a smartwatch, and speculation persists about a long-rumored TV product of some sort to shake up the living room viewing experience.

“We’re working on some things that are extensions of things you can see and some that you can’t see,” Cook said at the annual meeting, referring to a 32 per cent increase in research and development costs last year.

Responding to a question about innovation, Cook said Apple preferred not to talk about new products under development so as not to tip off the competition.

“You can see we’re getting ripped off left, right and sideways,” he said.

Apple’s shares fell 0.27 per cent to close at $526.24 on Friday. They have clawed back substantial ground since falling below $400 in June, but remain well below the record-high $700 level of 2012, weighed by concerns about whether the company has any new hit products in the pipeline.

Though Cook steered clear of that discussion, he shed some more light on the Apple TV business, which executives have long referred to as a “hobby” for a company expected to chalk up some $181 billion in sales this fiscal year.

The $99 Apple TV set-top box, which streams content from Netflix and other video sources to a TV, had racked up $1 billion in sales in the past year, he said.

“It’s a little more difficult to call it a hobby these days,” Cook said.

Cook took pot shots at Google, saying that most users of its Android mobile operating system are using older versions, presenting a security threat. In contrast, he said, 89 per cent of users of devices based on Apple’s iOS operating system have the most recent version of the software.

Shareholders at the annual meeting at Apple’s Cupertino, California, headquarters re-elected all board members.

In the run-up to the meeting at 1 Infinite Loop, many investors had publicly debated whether Apple should not put any of its massive cash pile to better use.

Cook said the company will provide an update within 60 days on how it will use the cash, which totaled nearly $160 billion at the end of 2013. That time frame is in line with Apple’s previous comments that it would announce its latest cash management plans around April.

Apple repurchased $14 billion in stock in a two-week period earlier this year, under pressure from activist investor Carl Icahn, who had been publicly calling for the iPhone-maker to buy back an additional $50 billion of stock on top of its existing buyback program.

The billionaire investor, who in late January said he held more than $4 billion of Apple shares, withdrew his shareholder proposal following Apple’s announcement of the buyback.

Some analysts believe Apple may eventually dip into its coffers to buy something big. The iPhone maker has so far shied away from the mega-acquisitions that far more aggressive rivals like Google and Facebook Inc have pursued, though Cook did not rule out forking over a big sum of cash if warranted.

Cook said Apple has acquired 23 companies in the last 16 months and remained on the lookout for interesting technology and companies.

Apple is not in a race to acquire the most companies or to spend the most money, but that “doesn’t mean we won’t buy a huge company tomorrow afternoon,” he said.

And he warned shareholders not to focus too narrowly on short-term gains.

“If you’re in Apple for only a week … or two months, I would encourage you not to invest in Apple,” he said.

“We are here for the long term.”