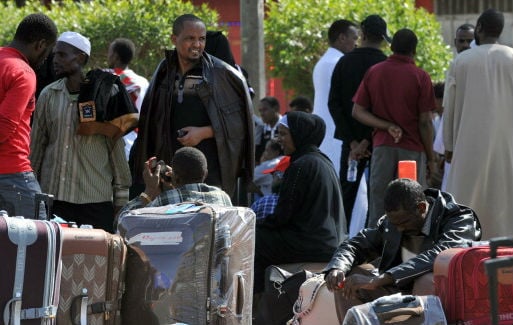 A Sudanese man was killed in a second flare of clashes since Saturday between Saudi riot police, citizens and foreign workers in Riyadh amid a clampdown on visas, state media said late on Wednesday.

The report on the official Saudi Press Agency, which cited a Riyadh police spokesman, gave no further details about the dead man, but said the clashes had started as a dispute between Saudis and foreigners earlier in the day.

“A dispute between a group of citizens and violators of the residence and work permits happened, resulting in fights between the two groups with knives,” the police spokesman was quoted as saying.

The spokesman also said 17 other people of different nationalities were injured and taken to hospital after the clashes in the Manfouha district of southern Riyadh, a low-income area that is home to many poorer expatriates.

Gunshots could be heard occasionally from inside Manfouha’s narrow streets.

Thousands of foreign workers, mostly from Africa, have surrendered to the authorities in Manfouha since clashes there on Saturday in which two people, a Saudi and an unidentified man, were killed.

The world’s top oil exporter is pushing its 9 million foreigners to resolve irregularities in their passports or face penalties including prison and deportation, and has carried out raids on shops, offices and marketplaces to check visas.

The campaign, aimed at ending a black market in cheap foreign labour and creating more jobs for Saudis, has led millions of people to go through the tricky process of changing their visas, while hundreds of thousands of other people have left.

There have been other reports of disturbances in recent days, leading to arrests but no deaths, in Jeddah and Mecca.

Since the raids began 10 days ago, following a seven-month amnesty to make changing visas easier, tens of thousands of people with incorrect paperwork have been deported.

Late on Wednesday, Manfouha was closed off to media as a heavy police presence blocked roads and buses with riot police and ambulances waited on the side, Reuters witnesses said.

In one location set aide by authorities for workers without proper visas to turn themselves in, people were still congregating with their luggage, waiting for transportation to a deportation centre.

Buses for the deportation centre occasionally departed, packed inside and carrying more people and luggage on the roof.

A steady stream of people was still approaching the area, with many carrying luggage, as police shouted orders and onlookers watched from nearby roofs.

The road was littered with rubbish and forgotten bags or suitcases that had fallen from buses.