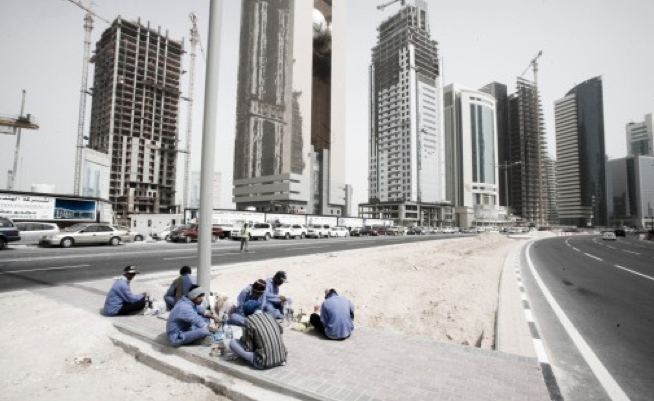 Qatar is still falling short in its protection of migrant workers building the country’s 2022 world cup stadiums, according to an Amnesty International report.

The organisation said dozens of workers from Nepal and the Philippines had been charged recruitment fees by agents in their home countries, were housed in squalid conditions and barred from leaving Qatar by employers who confiscated their passports.

This came despite Doha drafting worker welfare standards in the wake of criticism two years ago.

Amnesty said it interviewed 234 workers involved in rebuilding the Khalifa Stadium and the surrounding Aspire Zone between February 2015 and 2016.

“Many of the migrant workers who spoke to Amnesty International reported arriving in Qatar to find that the terms and conditions of their work were different from those that they had been promised by recruiters in their home country,” the organisation said.

“The main form of deception that workers reported was with regard to salary. All but six of the 234 men interviewed told Amnesty International that, on arrival in Qatar, they learned that their salaries would be lower than the amount they were promised.”

The head of the country’s Supreme Committee for Delivery & Legacy Hassan Al Thawadi said the organisation had highlighted malpractices faced by some of the 5,100 constructions workers building the stadiums, according to Reuters.

“We’ve always recognised that we don’t have a magic wand that could fix the matter from the very beginning,” Thawadi told reporters in Doha on Monday, calling the World Cup a “catalyst for change”.

Qatar and FIFA are expected to come under increasing pressure as the number of workers brought in to build the stadiums increases to 36,000 within the next two years.

The football governing body said in a statement on Thursday that it would urge Qatari authorities to take action and ensure new labour standards are enforced in construction projects across the country.

In its report, Amnesty in particular pointed to abuses by small sub-contractors brought in to work on the Khalifa Stadium.

These companies did not appear to have been vetted, it claimed, with staff regularly threatening to withhold workers’ pay or report them to the police.

“The penalties used by company managers to exact work from the workers included the threat of non-payment of wages, being deported or, conversely, not being allowed to leave Qatar because the employer would not provide an exit permit,” Amnesty said.

Other abuses cited by the organisation included that of seven Nepalese men who were refused permission to go home and check on their families after last year’s devastating earthquake in the country.

“They told Amnesty International of their despair at not knowing if their families were alive and not being able to return home to see them.”

Another metalworker at the Khalifa Stadium described his life in the country as “like a prison”.

“When I first complained about my situation, soon after arriving in Qatar, the manager said ‘if you [want to] complain you can but there will be consequences. If you want to stay in Qatar be quiet and keep working’,” he was quoted as saying.

Qatar has recruited hundreds of thousands of south Asian workers to build infrastructure for the 2022 world cup, including the stadiums, a new airport, metro system and port.

Following criticism, last year it introduced electronic payment of salaries for workers, created an appeal process for those not permitted to leave the country by their employers and increased inspections of construction sites.

“Labour reform is a complex issue, especially in a nation with a small indigenous population and a far larger population of guest workers,” a section from a letter sent to Amnesty by Qatar’s Ministry of Foreign Affairs said.

“We believe these reforms demonstrate Qatar is working hard to improve the lives of guest workers and that steady progress is being made.”

Amnesty noted the country had prevented some visible aspects of abuse, with improved health and safety standards and betters accommodation conditions for some workers, but hidden abuses like mistreatment of workers and the withholding of wages and passports were still occurring.

It said recent reforms may not be enough as multinational firms pass responsibility for workers’ welfare to subcontractors and the government fails to enforce labour protection laws that do exist.

“The situation of migrant workers is made more precarious by the authorities’ persistent failure to enforce the laws that do exist to protect workers’ rights,” it said.