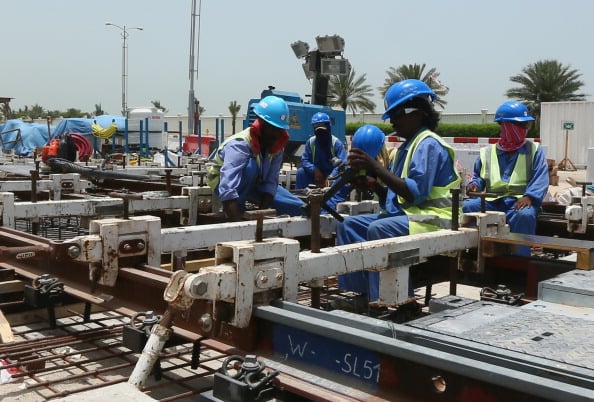 From a 59-storey tower in Abu Dhabi, the offices of Arabtec look out over the Gulf towards Middle Eastern and Asian nations where the construction firm hopes to expand. It is a symbol of the company’s ambitions – and the way in which they have run into hard reality.

Arabtec agreed last year to lease the entire tower, which was to serve as a base for it to diversify into the oil, power, infrastructure and real estate sectors, providing capacity for thousands of future employees as well as joint venture partners.

Much of that expansion is now in doubt. After a souring of ties between Arabtec’s chief executive and a big state investor led to his sudden resignation and a collapse of the company’s shares last month, Arabtec has launched a review of its plans.

The Dubai-listed firm’s troubles have hit the wider stock market, helping to trigger a crash that erased about $30 billion of value in eight weeks, and raised questions over corporate regulation and disclosure in the United Arab Emirates.

The meteoric rise and fall of Arabtec and former CEO Hasan Ismaik reveal some of the perils of business in the Gulf: secretive state shareholders, management authority which relies partly on personal connections, and hands-off regulation.

“The Arabtec mess points to structural weaknesses in the business environment in the UAE and in the region more generally,” said Jim Krane, a Gulf expert at Rice University’s Baker Institute for Public Policy in the United States.

Business in the UAE is competitive and vibrant, but driven by opaque personal ties and political clout, he said. At the same time, regulation of companies is often tolerated only if it does not get in the way of traditional business methods.

“Companies are expected to adhere to the wider policy choices of the government and ruling family, and these dictates are not generally made public. There is a lot that happens beyond the public eye.”

Founded in Dubai four decades ago by a Palestinian-born businessman, Arabtec rode the region’s oil boom to become one of its biggest construction firms. It helped to build the world’s tallest skyscraper, the Burj Khalifa in Dubai.

Aabar strengthened its management influence over Arabtec, a process that culminated in February 2013 with the resignation of founder Riad Kamal as CEO and his replacement with Hasan Ismaik, a Jordanian businessman who was then just 36 years old.

Ismaik rose rapidly from obscurity. Born to what he describes as a family of modest means, he says he moved to Dubai in 1996 to work as a real estate broker, getting a big break a few years later when he arranged a deal for well-connected Abu Dhabi investors to buy several buildings in Dubai.

He started buying shares in Arabtec and by August 2012, was prominent enough to become a non-executive member of its board, a position which within a few months led to his becoming CEO.

Investors saw Aabar’s backing of the firm as a ticket to great wealth, driving the share price up more than threefold in the first four months of this year. This made Ismaik rich; in June, Forbes magazine said he had become the first Jordanian billionaire, and the third-youngest in the Middle East.

The benefits to Arabtec of having a big state shareholder seemed almost limitless: in February, Aabar asked it to build 37 new towers in Abu Dhabi and Dubai. The deal was worth $6.1 billion, or three times Arabtec’s total revenues in 2013.

In March, Arabtec agreed on an even more spectacular deal, to build one million houses in Egypt in a $40 billion project backed by the Egyptian and UAE governments. Arabtec effectively became a political tool of the Abu Dhabi government, which is pouring billions of dollars into Egypt to prevent any resurgence of the Muslim Brotherhood there.

Ismaik pushed plans to diversify the firm, explored acquisition opportunities and publicly discussed the idea of launching a string of initial public offers of shares in Arabtec units across the Middle East. Foreign expansion plans included opening an office in Serbia to target the Balkans.

“That was my vision – to take Arabtec to an international level,” Ismaik, a tall, bearded, soft-spoken figure in the white dishdasha robes worn by many men in the Gulf, told Reuters in Abu Dhabi late last week.

But for many fund managers, who had seen Arabtec’s stock soar far beyond their estimates of fair value as leveraged investors bid it up in response to the bullish predictions, the story was too good to be true – and so it proved.

Arabtec shares began plunging in mid-May as rumours circulated of a dispute between Aabar and Ismaik, raising the spectre of Arabtec losing Aabar’s support and being forced to slash its growth plans. Aabar declined to make any comment.

The rumours snowballed in early June when stock exchange data showed Aabar had suddenly cut its stake in Arabtec to 18.94 per cent from 21.57 per cent over several days.

In mid-June, Ismaik publicly denied there was any rift with Aabar, but the writing was on the wall: two days later he resigned, saying he wanted to pursue his own business interests.

From mid-May to their low in early July, Arabtec shares lost an astounding 70 per cent. Adding to investors’ jitters was uncertainty about the fate of Ismaik’s stake in Arabtec.

In late May, Arabtec said Ismaik had raised his holding to 21.46 per cent from 8.03 per cent; there was no explanation of when, or why this had not been disclosed earlier, since bourse rules require changes in stakes above five per cent to be revealed promptly. In mid-June, when Ismaik quit, bourse data showed his stake had risen further to 28.85 per cent.

He says he initially bought under several names – legal in the UAE – and that bourse data showed his stake jumping when regulators decided to consolidate the stakes under one name.

Ismaik says he has received several offers for his stake, from parties he declines to identify. But he insists he is in no hurry to sell, and that he may only consider selling for prices 50 per cent or more above the current market price.

What went wrong? Both Arabtec and Ismaik say his stint at the company was productive and that his decision to leave was a personal one; Aabar declines to comment. But a number of senior executives linked to Ismaik have left Arabtec since his resignation, company sources say, suggesting Aabar wants a change of management style.

One theory held by many people who know Arabtec is that Ismaik became too prominent and too flamboyant for the taste of the firm’s financial backers, in a society where many of the most powerful businessmen keep low public profiles. The Forbes story on Ismaik’s success may have contributed to his downfall.

“He gave people the bullet to shoot him with,” one Abu Dhabi businessman, who declined to be named because of the sensitivity of the Arabtec saga, said of the publicity surrounding Ismaik.

Another widely held theory is that Ismaik’s investments in Arabtec, which at the market’s peak were worth $2.7 billion, were conducted on behalf of other interests – a common practice in the Gulf – and then became a source of friction with them.

Ismaik says he invested his own money in Arabtec, borrowing money from banks with which he had close ties.

The scars left by the Arabtec saga on both the company and the stock market may heal with time. Arabtec chairman Khadem Abdulla al-Qubaisi held a news conference early this month, his first since Ismaik’s departure, to say the firm’s construction projects remained on track and Aabar continued to support it.

Aabar may further tighten its control of Arabtec; a board member from IPIC, Mohamed Al Fahim, has taken over as acting CEO. In the last few days Arabtec shares have partially recovered, though they remain 46 per cent below their peak.

But Arabtec looks likely to be a more sober, cautious firm than it was in Ismaik’s day. Qubaisi said it was now cutting costs, reviewing excessively high salaries and putting less emphasis on the diversification plans championed by Ismaik.

“We are reviewing a lot of things,” Qubaisi said, adding that the company was restructuring itself to focus on its core construction business.

In particular Arabtec may outsource more of its new projects rather than bulking up itself, which could be costly and disruptive. Analysts believe the firm, which earlier this year said its workforce totalled about 63,000, would need to hire thousands more white-collar staff to manage giant deals such as the Egyptian housing construction project.

Ismaik’s future may also be somewhat more modest. He says he does not feel bitter about his experience at Arabtec and plans to stay in the UAE, focusing on his Abu Dhabi-based private investment company, HAMG, which has interests in areas from real estate to hotels and logistics.

Married with four children, he has been spending some of his time since he quit watching World Cup soccer, rooting for Germany; he owns part of German soccer club TSV 1860 Munchen.

“I will take life as it comes. I believe in God, and I will win,” he said.