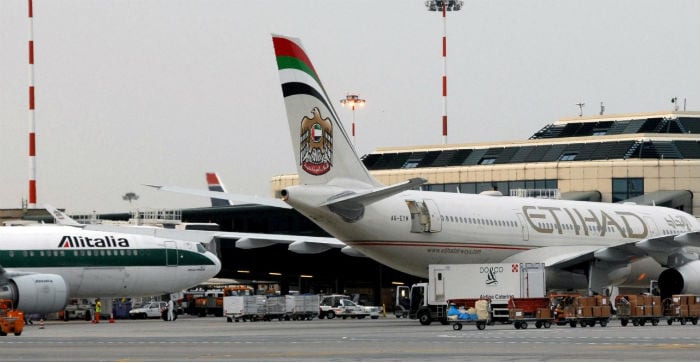 Abu Dhabi-based Etihad Airways will buy almost half of Alitalia and invest 560 million euros ($751 million) into the lossmaking Italian airline in a turnaround effort that will involve heavy job losses under a long-delayed deal signed on Friday.

The two airlines have been in talks for nearly a year, but a final agreement was held up by negotiations over thousands of job cuts and debt restructuring.

“After much effort, a year of work and many late nights, we did it,” Alitalia CEO Gabriele Del Torchio told reporters after the signing of the deal attended by Chairman Roberto Colaninno and Etihad Chief Executive James Hogan.

Alitalia has made an annual profit only a few times in its 68-year history and received numerous state hand-outs before being privatised in 2008.

It was kept afloat by a government-engineered, 500-million-euro rescue package last year.

Without a deal with cash-rich Etihad, its planes may have been grounded within weeks, industry analysts have said. The airline’s net loss last year more than doubled to 569 million euros.

In addition to Etihad’s investment, which will pay for a 49 per cent stake in the Italian carrier, a share in its frequent flier programme and some slots at London’s Heathrow Airport, shareholders agreed to a 300 million euro capital hike.

Alitalia’s creditor banks, which include UniCredit and Intesa Sanpaolo, have agreed to an additional 300 million euros in new loan facilities and to restructure up to 598 million euros in Alitalia debts, valuing the total deal signed on Friday at 1.76 billion euros.

Existing Alitalia shareholders including state-owned post office operator Poste Italiane will group their holdings in a so-called “mid-company” that will control 51 percent of the shares in the restructured airline.

A union with Etihad will bring Alitalia money to invest in more profitable long-haul routes and make it less reliant on domestic and regional services where it has struggled to compete against low-cost airlines and high-speed trains.

“This deal will definitely change the way Alitalia is managed, boost its revenues per passenger thanks to better use of its fleet and by adding new long-haul aircraft,” said Andrea Giuricin, a transport analyst at Milan’s Bicocca University.

For the government, grappling with economic stagnation and unemployment levels not seen since the 1970s, a deal to keep the airline flying and limit job cuts was vital.

“Alitalia will return to be one of the foremost airlines in the world. We did it,” Transport Minister Maurizio Lupi said.

Alitalia CEO Del Torchio said decisions had been made that were “painful but necessary”.

Etihad’s Hogan said Alitalia, which offers access to Europe’s fourth-largest travel market and flies 25 million passengers a year, was a good fit for his airline.

“There are no more exciting destinations in Europe than Italy,” Hogan said, adding he wanted to revamp the Alitalia brand. “To me, the sexiest airline in Europe is Alitalia.”

The Gulf carrier already has stakes in Air Berlin and Ireland’s Aer Lingus and Friday’s deal will help it expand in Europe. However, Hogan said it would take time to turn Alitalia around.

“The way Alitalia is going to look in the future is very different,” he said. “We’re putting in a three-year plan to move the airline back to profitability by 2017.”

Etihad plans to turn Rome’s Fiumicino Airport into an intercontinental hub and improve Alitalia’s cargo business, as well as add long-haul connections from both Rome and Milan and new routes between Abu Dhabi and Italy, Hogan said.

The deal is subject to approval by European authorities.