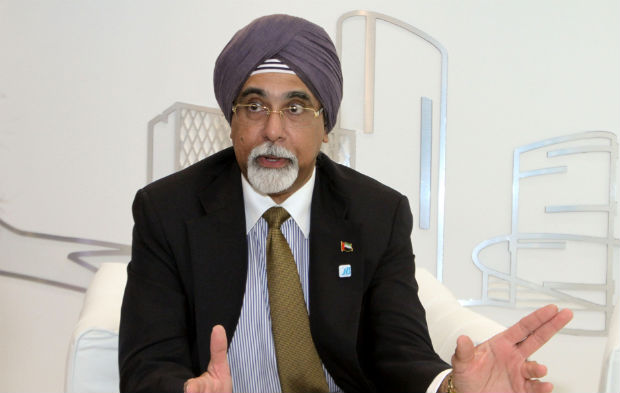 “As a real estate developer we are quite pragmatic about how we want to develop or launch our developments,” Gurjit Singh told Gulf Business on the sidelines of Cityscape Abu Dhabi.

“We don’t look at short term, we look at medium to long term… so we will be very geared to the market and very market focused.”

The capital’s largest developer, which merged with Sorouh last year, has also been tapping into the renewed optimism in Abu Dhabi’s property market through three new launches.

Aldar recently announced three residential projects with a combined value of Dhs5 billion, and has 20 projects in the pipeline.

“Based on our extensive land bank and some of the more important properties we have in our land bank we identified 23 opportunities,” said Singh.

“Out of those, three have been already launched. The other 20 will be spread across Abu Dhabi in well-endowed locations right across the Abu Dhabi metropolitan area and even in Al Ain.”

Despite the rising optimism in the emirate’s property market, the company is aiming for cautious growth and will fine tune its developments to market needs.

With a slew of new developments mostly high-end in Abu Dhabi, Singh noted that the majority of affordable homes in the emirate belong to older stock.

“Older stock either needs to be upgraded or it will lose its place in real estate sector. That leaves a gap that is for mid tier real estate products,” he said.

“The next zone of focus for property developers is mid tier real estate and that is a very important part of our overall development strategy.

“Hence in our 20 odd projects we are looking at have mid tier developments as well.”

Though the bulk of its investments are based in Abu Dhabi, Aldar is also eyeing new projects close to the World Expo 2020 site to tap into the ensuing real estate boom in the area.

“We do own land in Abu Dhabi, which is very close by to the Expo site and we intend to take advantage of market driven real estate developments there.”

Aldar has already developed a community called Al Ghadeeh, which is currently being handed over to owners.

“We have also seen some interesting trends over the last six weeks as we have managed to sell over 100 units in that particular development,” said Singh.

“So we have seen the growing interest in that area and there is a strategy to continue development in that area.”

The builder of the Yas Island Formula One race track reported a profit of Dhs427 million ($116.3 million) in the final quarter of 2013, compared to Dhs239 million in the same period in 2012.

Singh forecast another strong year for the state-owned developer in 2014.

“In 2014, we will be creating products tailored to the market demand but we will also diversify our asset class offering,” he said.