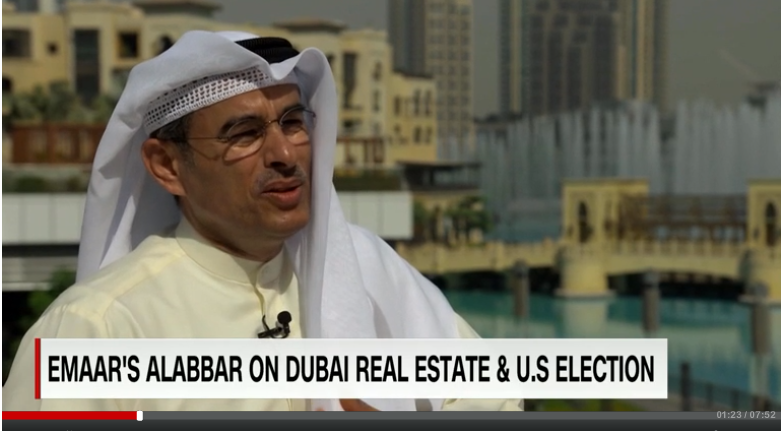 In a television interview with CNN this week the Emaar Properties chairman said the American billionaire’s comments did not “resonate well in the Middle East” and suggested the plans were unlikely to happen.

Trump famously said last year that the US should temporarily stop Muslims from entering the country during his successful bid to become the Republican presidential candidate.

His comments have been criticised widely across the world with outgoing US President Barack Obama recently saying in his Ramadan address:

“I stand firmly with Muslim American communities in rejection of the voices that seek to divide us or limit our religious freedoms or civil rights. We will continue to welcome immigrants and refugees into our nation, including those who are Muslim.”

Alabbar suggested Trump’s comments were maybe for “politics” but admitted they were not well accepted in the region.

He particularly dismissed Trump’s claims that Muslims have an “unbelievable hatred” of the US.

“I don’t know if he’s saying this for political reasons but that is so untrue,” he said.

“The way America provides services, like Google, Apple, Facebook, and if you look at the leadership in the region or those who run businesses here, many were educated in America, they have loyalty to America, they love America, and the people on the street too,” he said.

Alabbar added if Muslims were banned from entering the US they would simply go elsewhere, but suggested it was unlikely “to get to this situation”.

“I don’t think this is going to happen because it’s just so ridiculous. But if that really happens of course I will be a very unhappy person,” he said.

The Emirati also suggested the Trump name was not particularly well known in the Middle East despite fronting a number of real estate projects.

He suggested many in the region associated the ‘Donald’ name with Disney character Donald Duck rather than the businessman but described the Republican candidate as a “sweet” and “smart” guy.

During the interview, Alabbar also revealed that Emaar’s planned tower structure at Dubai’s Creek would be 100m taller than the current world’s tallest building the Burj Khalifa.