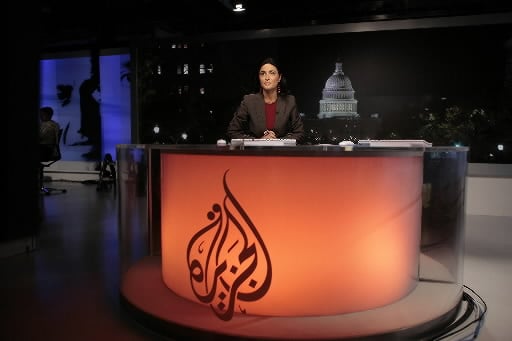 Four Al Jazeera journalists have been arrested in Egypt, the station said on Monday, after the Interior Ministry accused the Qatar-based channel of broadcasting illegally from a hotel suite with a member of the Muslim Brotherhood.

Al Jazeera’s offices in Cairo have been closed since July 3 when they were raided by security forces hours after the army ousted the Brotherhood’s Mohamed Mursi from the presidency.

Qatar was a strong financial backer of the Brotherhood’s rule and its relationship with Cairo has deteriorated in recent months as it vehemently opposes the army’s overthrow of Mursi and the crackdown on his movement that has followed.

“State security received information that a member of the (Brotherhood) used two suites in a Cairo hotel to hold meetings with other members of the organisation and turned the suites into a press centre,” the ministry said.

“(They) made live broadcasts of news that harms homeland security, spreading rumours and false news to Qatar’s Al Jazeera channel without permits.”

The Interior Ministry said a member of the Brotherhood and an Australian journalist who works for Al Jazeera were arrested and equipment was seized, including broadcast transmitters.

Al Jazeera said four journalists from its English news channel had been arrested, a correspondent, two producers and a cameraman.

Since Mursi was ousted, Egypt has faced some of its worst violence in decades, which the government has blamed on Islamic militants. It declared the Brotherhood a terrorist group last week and has arrested thousands of its members, including Mursi.

The New York-based Committee to Protect Journalists on Monday classified Egypt alongside Syria and Iraq as one of the most dangerous countries for journalists to operate in.

“We condemn the arrests and call on the Egyptian authorities to release those journalists,” a CPJ Middle East and North Africa representative said.

“We see that Egyptian authorities here are targeting journalists, in general, especially if those journalists are opposition journalists or are not following the lines the government is taking,” she said.

Egypt is pushing through a political transition that could lead to presidential and parliamentary elections next year. A constitutional referendum is due to take place in mid-January.