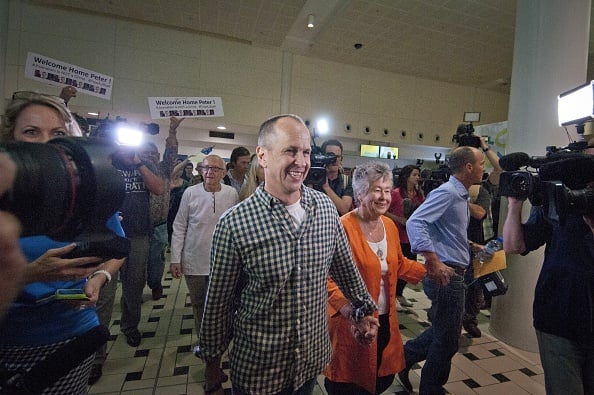 Peter Greste, the Al Jazeera journalist freed after more than a year in an Egyptian prison, arrived back in his Australian homeland on Thursday and called for the release of two colleagues still in custody.

Greste was released on Sunday after 400 days in a Cairo jail and had been in Cyprus since. He had been sentenced to seven years on charges that included aiding a terrorist group in a case that had attracted widespread attention and criticism of Egypt’s leadership and judiciary.

“I can’t tell you how ecstatic I am to be here. This is a moment that I’ve rehearsed in my mind at least 400 times over the past well, 400 days,” said Greste after embracing well-wishers on his arrival in Brisbane.

Greste’s colleagues, Canadian-Egyptian Mohamed Fahmy and Egyptian national Baher Mohamed, remain in prison. They were jailed for between seven and 10 years on charges including spreading lies to help a terrorist organisation – a reference to the outlawed Muslim Brotherhood.

Egyptian security officials have said Fahmy could be released soon and deported to Canada.

“If it’s right for me to be free then it’s right for all of us … I think that Egypt now has an opportunity to show that justice doesn’t depend on your nationality,” Greste said.

Greste said later on Thursday he would continue to campaign for the release of his two colleagues, whom he described as brothers. He also said he wanted to return to journalism after spending time with his family.

“I was really given an opportunity to look back at my life again too, look back at the screw-ups I have made, to appreciate all … the amazing things I’ve done and experienced in ways that I never really understood in the past,” Greste told a news conference.

Egyptian authorities accuse Qatar-based Al Jazeera of being a mouthpiece of the Muslim Brotherhood, the movement the army removed from power in 2013. Al Jazeera denies the allegations.

The journalists say they were doing their jobs when detained. Their imprisonment reinforced the view of human rights groups that the government was rolling back freedoms gained after the 2011 uprising that toppled autocrat Hosni Mubarak.

They were detained in December 2013 and charged with helping a terrorist group by broadcasting lies that harmed national security.

Baher Mohamed was given an extra three years for possessing a single bullet. If the authorities decide to free him, resolving his case could be more complex because he does not possess a foreign passport.