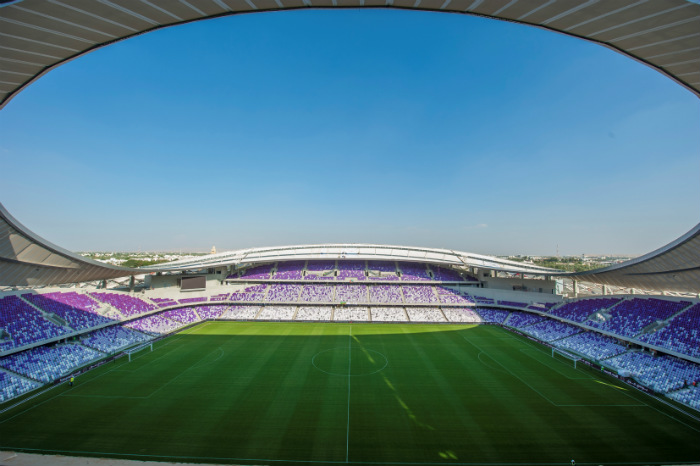 The new 25,000-seater Hazza bin Zayed Stadium in Al Ain is completed and ready for its official launch in January 2014, its developers announced in a statement.

Final touches are being added to the project, following the completion of construction in 17 months.

The new stadium in Al Ain, designed to resemble a palm tree, is expected to become the emirate’s main football stadium for all its upcoming matches.

The external façade includes 600 lighting panels that project white colour during the day and purple and yellow colours at night (the colours of Al Ain Club).

The stadium is spread across 45,000 square metres, with a height of 50 metres. The 25,000 seats are divided to “provide optimal visibility in their spectator segments”, with the ‘First Class’ stand accommodating 3,000 seats, the statement added.

The stadium also has seats allocated for spectators of special needs, gates and areas dedicated to ladies and families and public parking facilities.

The venue also has the option to provide shade to all the spectators through the use of a moving-ceiling umbrella that can cover the whole stadium when necessary.

“The stadium will become a pioneering sports destination and a distinguished architectural marvel, forming a vital part of an integrated and a huge mixed use development with facilities serving the sports, social and tourism sectors of Al Ain City and the UAE in general.”

Along with hosting local, regional and international football matches, the stadium is also prepared to host arts and social events, the statement said.

Hazza bin Zayed stadium is the cornerstone of a large, mixed-use, 500 million square metre development in Al Ain. The project includes the development of residential, commercial and entertainment units as well as a luxury hotel and sports and social facilities. The buildings will also be linked to a chain of restaurants, cafés and retail outlets.