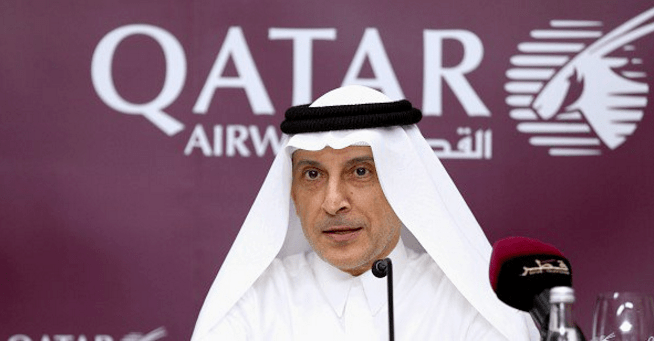 Outspoken, controversial and confrontational. These are some of the words used to describe the chief executive of Qatar Airways.

But despite his ability to capture headlines, there is no escaping what Akbar Al Baker has achieved in a relatively short space of time.

In just under two decades, Qatar Airways has become a force to be reckoned with in the global aviation industry. It is one of the fastest growing airlines, operating one of the youngest fleets in the world. And there is a sense that Al Baker – through sheer will, determination and the strength of his personality – has lifted it every step of the way.

This rise is a personal point of pride for the Qatari, who sees the airline as more than just a business. He thinks of the company as a symbol of Qatar’s rise on the world stage.

“As an airline, Qatar Airways is a true economic pillar of the Qatari society and furthermore, a global emblem of the rise of our country and its many blossoming industries,” he says.

“There is no greater satisfaction than to see your nation’s flag flying to all corners of the globe. To me, my greatest inspiration has been the leadership of the nation – the state of Qatar.”

Under Al Baker’s leadership, the organisation has brought the Qatari flag to destinations as far away as Oslo, Buenos Aires, Chicago and Beijing. It has built a route map of more than 150 destinations, jostling with local and international heavyweights in terms of its global reach.

But for Al Baker, it has never just been about scale. When he took the helm in 1997, his task was simple: to create the best airline in the world.

Three Skytrax ‘airline of the year’ awards later he has surely gone some way to achieving that. But there is always more to be done and the chief executive seems the type of personality who is unlikely to rest until he gets there.

Many will remember the moment Al Baker took the stage at the 2013 Dubai Airshow alongside his compatriots from Emirates and Etihad to announce a $19bn order of 50 Boeing 777-9Xs plus five Airbus A330-200 freighter aircraft.

Indeed, if past indications are anything to go by he seems to revel in the limelight even if it means becoming a source of controversy.

At this year’s Paris Airshow the airline had a whopping five aircraft on static display, more than all other carriers combined. It also made another show stealing order of 10 777-8Xs and four 777 freighters, valued at $4.8bn.

But the Qatar airways chief was not content with just an order tally under his belt.

“As you know, no press conference with Qatar Airways is without controversy, so I would like to make a statement. I hope that the gentleman at Delta knows that we are creating even more jobs in the United States by buying these planes,” he declared after the signing ceremony.

A clear jab at a rival that had accused the carrier and its fellow Gulf airlines of costing US citizens jobs through their ambitious expansion plans in the country.

Aircraft manufacturers too have been the target, of his scorn, despite the carriers impressive tally of 330 aircraft on order worth more than $70bn.

In 2010, following numerous delays to the 787 Dreamliner programme he said: “I was really taken aback by the (787) programme. I never expected a programme could be delayed so much with a company like Boeing, which has pride in its quality. They have very clearly failed.”

More recently in November 2014, he also criticised Airbus for delays to the delivery of Qatar’s A380 order. Concerns regarding the quality of the cabins led to a three-month delay that cost the airline more than $200m in revenue, he said.

Even now when asked about the impact of the five-year delay to the opening of Doha’s new hub, Hamad International Airport, on Qatar Airways’ growth he redirects the conversation to the impact of aircraft delays.

“Qatar Airways’ growth was impeded by aircraft delays more so than the hub opening. The delays to the Dreamliner and A350 did impact our ability to grow our network. There were also delays to existing aircraft types which affected the schedule for new destinations to join our route map,” he says.

If the A380 incident is anything to go by, it is clear the chief executive has a meticulous eye for detail when it comes to the quality of aircraft the airline receives.

“I cannot speculate or comment on future deliveries: what I can say is that Qatar Airways absolutely scrutinises every single aircraft we induct into the fleet to ensure safety is never compromised in any way, and also, to ensure our assets are up to the standards we expect.”

Almost a year later he says the craft, which Qatar operates in a tri-class configuration, has been “very well-received” by passengers.

“We have ordered 13 A380s in total and are currently operating six to destinations where we have heavy traffic volumes; Bangkok, Paris, London – with other A380 destinations to be announced soon.”

But will his usual bombastic display be missing from air shows in the coming months?

“We are an airline that continues to rapidly expand. However, we have made a significant amount of orders in the past and we cannot simply purchase everything,” he says.

“We are now focused on optimising our route map with the most effective aircraft.”

In the meantime, Qatar Airway’s route network continues to grow. In recent years its pace of expansion has been blistering, adding 12 new destinations annually in 2014, 2013 and 2012 respectively.

This will drop to eight destinations this year – with Amsterdam, Durban, Zanzibar, Sialkot, Faisalabad, Multan, Abha and Ras Al Khaimah mooted – but Al Baker’s ambition does not appear to be dampened.

Indeed, on the US where the rapid expansion of Qatar and the other Gulf airlines has been met by hostility from local carriers United, America and Delta, he appears emboldened.

In response to the allegations that his airline has received $8.4bn in government loans and $6.8bn in subsidies, he has been defiant. Al Baker has dismissed the claims as fictitious and even threatened to leave the oneworld alliance because of the actions of fellow member American Airlines.

“If we are being cornered by an airline that invited us to be part of the alliance and is now acting against our interests … blocking inventory and blocking us gates at JFK, of course we have no purpose to be in an alliance,” he told reporters in June.

In the meantime, the firm’s route expansion in the country shows no signs of slowing down.

“The United States and Australia will be seeing more of Qatar Airways next year,” he says. Sydney, Adelaide, Los Angeles, Boston and Atlanta are among the routes planned by the airline in 2016 as it looks to cement its position in two important markets.

In the US he also reveals that “other exciting new routes” are still to be announced as the airline continues with its hub and The goal is simple, to add at least another 50 destinations by the time the 2022 FIFA World Cup arrives.

“By 2022, Qatar Airways will be operating to more than 200 destinations and we will have nearly 200 aircraft in our fleet. By this time, HIA will be fully open and able to handle 50 million passengers a year, which means visitors travelling to Qatar for the event will be impressed by both the passenger experience in the air and by the modern and efficient infrastructure when they land in Doha,” he says.

As he returns to the United Arab Emirates this month for the Dubai Airshow, all eyes are once again going to be on the Qatari’s next move.