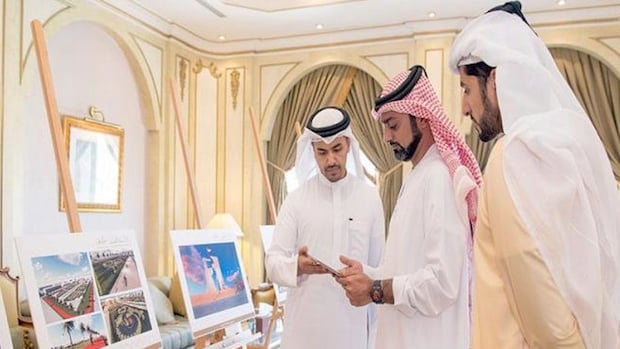 Ajman’s ruler Sheikh Humaid bin Rashid Al Nuaimi has reviewed the designs for the development of a new Martyrs’ Square in the emirate on Wednesday.

He also viewed plans for the expansion of Al Jerf Park to include a Martyrs’ Memorial, official news agency WAM reported.

“These projects will be constructed in tribute to the martyred servicemen who answered the call of duty,” the report said.

He said the Martyrs’ Memorial will be one of the “signature landmarks” in the emirate of Ajman and the design will be “unparalleled and will reflect the value of the martyrs”.

Earlier this year, Sheikh Mohammed bin Zayed, crown prince of Abu Dhabi, approved the final design of the UAE Memorial to be built in the UAE capital.

Also dedicated to ‘UAE national heroes’, the monument is anticipated to be built in time for this year’s Commemoration Day on November 30.

Designed by British artist Idris Khan, it will be located in Memorial Park close to the Sheikh Zayed Grand Mosque.

Consisting of a series of metal panels supporting each other, the memorial will include the name of each UAE martyr.

The park will also include a large plaza with terraced seating, public gardens, a pavilion and a pool that will reflect the memorial.

“The UAE Memorial symbolises the ultimate sacrifice of our heroes who have set the greatest example of giving and heroism,” Sheikh Mohammed said at the time.