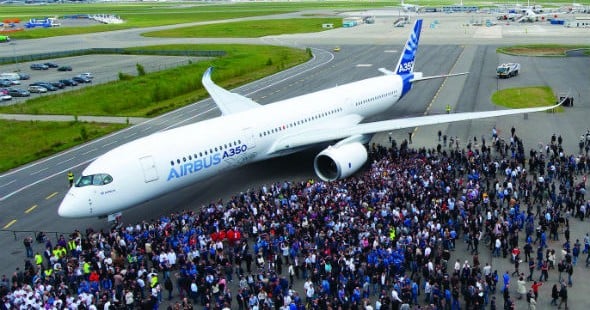 Flight trials for Airbus’s latest passenger jet, the A350, are going well and it is sticking to its target of delivering the first of the lightweight jets in the second half of 2014, programme chief Didier Evrard said.

The A350, designed to compete with the Boeing 787 Dreamliner and the larger Boeing 777, staged its maiden flight in June. The European planemaker now has two aircraft flying and has notched up 75 flights and over 370 hours of flight tests.

“The flight test programme … is going very well,” Evrard told reporters at a briefing on Monday, adding that the project was approaching its “most critical phase” as it enters industrial ramp-up.

Airbus officially aims to deliver the aircraft in the second half of 2014.

Evrard said Airbus hoped to have the first A350-900 variant certified in August next year, in time to be delivered to its first customer, Qatar Airways, in October.

Airbus said four out of five A350 development aircraft have entered final assembly, with the fifth due at the end of the month. Of these, two are already flying.

It also outlined plans to increase production facilities as it aims for 10 aircraft a month within four years of entering service. For now, Airbus plans to move from a production rate of one-a-month now to three-a-month by the end of 2014.

Evrard said Airbus would decide in 2016 whether to increase production beyond its ultimate 10-a-month target.

Airbus aims to freeze the design of the largest member of the A350 family, the 350-seat A350-1000, around the end of the year. The aircraft is due to enter service in mid-2017, some three years ahead of a larger revamped version of Boeing’s 777.