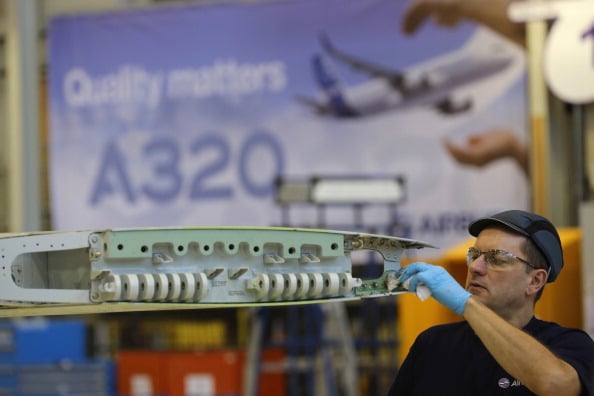 Airbus has restarted work converting a French assembly line once used for its A380 super-jumbo to build single-aisle jets, in another sign that the planemaker is gearing up for a recovery.

The project in Toulouse had been delayed last year during the early ravages of the coronavirus crisis. The line will be used to make A320 and A321 aircraft and should be operational by the end of 2022, Airbus said Wednesday in a statement.

Airbus is reviving the project “with market recovery in sight and a potential return to pre-Covid production rates for single-aisle aircraft between 2023 and 2025,” the company said.

The move will boost Airbus’s French work-share in single-aisle jets, underscoring an industry shift away from larger planes that accelerated during the pandemic. Demand for twin-aisle jets made at the main campus in Toulouse is likely to take several years to recover. Meanwhile, the planemaker has been communicating with suppliers on its ramp-up plans for the A320-family.

With existing facilities in Hamburg, Germany, and Mobile, Alabama, Toulouse will become the third Airbus plant making the larger A321 version of the narrow-body jet. More than half of A320-family backlog is now made up of A321s, a spokesman said — showing the need to tackle production issues before ramping up again.

The shift should improve production quality and competitiveness, Airbus said, while supporting the entry into service of the long-range A321XLR variant from Hamburg in 2023.

The move shows that Airbus is serious about its desire to aggressively increase A320-family production, Jefferies analyst Sandy Morris wrote in a note. He expects output for the series to reach around 57 a month by 2024, still below pre-crisis levels of 60 planes a month. The monthly rate now stands at 40.

Airbus first laid out plans to add the new line in January 2020, amid production issues caused by the order frenzy for stretch versions of its A320 and the wide range of cabin layouts that made assembly more complex.

The pausing of the Toulouse line had also become a political issue, with French workers concerned they would lose out on work with the double-decker A380 phased out. The company, whose biggest shareholders are France and Germany, has always sought to maintain a balance among jobs in the two countries.

The new line will employ 500 people once production returns to pre-covid rates, the Airbus spokesman said.