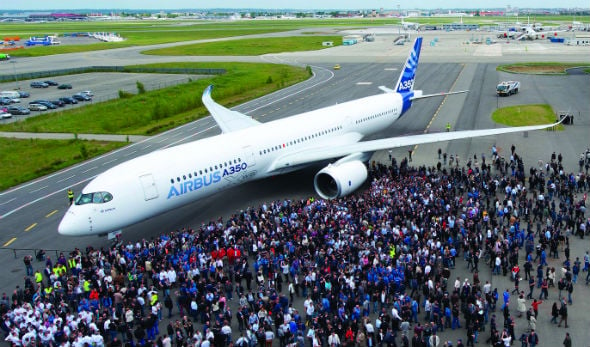 The CEO for Airbus has said the European plane maker enjoys “a good relationship” with all Middle Eastern airlines and is “very close” to the region.

Speaking at its annual Innovation Days in Toulouse, Fabrice Brégier told reporters he was very pleased with the manufacturer’s work in the Gulf and attributed much of the company’s recent success in the region to the popularity of its superjumbo, the A380.

“We enjoy, I believe, a good relationship with all the companies in this region,” said Brégier, addressing the world’s aviation media.

“I’m very pleased to see that the majority of the growth of Emirates comes from the introduction to service of the A380.

“Qatar Airways is the launch customer of the A350 which is very important. “Etihad as well and others are about to make decisions [on ordering planes] so the Middle East is a region of the world which is very close to Airbus.”

Despite being the launch party for the A350, of which Qatar airways has ordered the first 80 aircraft, the Airbus event focused heavily on the A380.

Middle East airlines have seemingly fallen in love with the 73-metre long plane – Emirates is the largest operator of the aircraft in the world with 33 A380s currently in its fleet, while Etihad and Qatar Airways both have 10 each on order.

Several of Airbus’ top executives were quick to praise Emirates and its president Tim Clark for maximizing its use of its A380 family, with suggestions that an extended range version – an even bigger model – is something that has been considered.

“It’s a question that we ask ourselves, about a longer range A380,” said Tom Williams, executive vice president of the A380 programme.

“I think if you were to talk to Tim Clark he would say there’s only one thing wrong with the A380 and that is it’s too small. ‘You need to get on and do the 900’ he said publicly recently.”

Chris Emerson, senior vice president for marketing at Airbus, batted away suggestions that the A380 is not profitable enough, highlighting the success Emirates’ has enjoyed with the aircraft by using the plane as it is intended.

“The yields the A380 warrants, if you operate the aircraft the way it is designed to be operated and that is to capture growth, will make you a lot of money.

“Looking at a stretch of the A380 is in the realm of possibilities but before we get there we need to see the airlines start to fully utilise the capacity of the existing A380.

“When we see that the trend is moving towards maximum capacity then we can start to say ‘OK, when do we look at the next evolution of the product?’”

Whether or not Airbus ever make a bigger A380 – which although it seems unlikely it is not hard to imagine Emirates leading the call for its creation – Williams was adamant the unique offerings of the superjumbo are continuing to satisfy its customers and the paying public.

“Some of the feedback we get from the airlines is the so called ‘honeymoon effect’ of a new aircraft has lasted far longer on the A380 than any other new programme that’s been introduced.

“We still have a sense that people are going out of their way, paying a premium to fly on the A380, and that’s pretty universal feedback that we’ve had.”