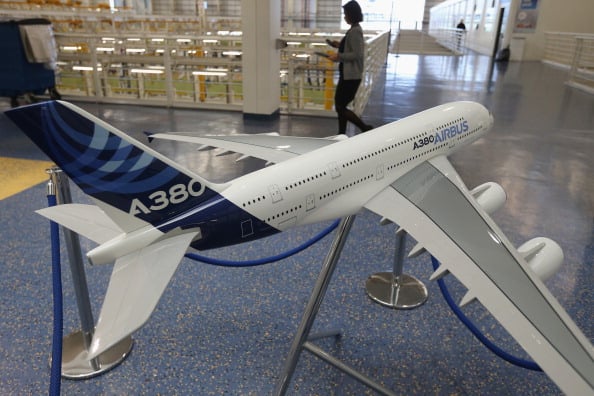 Airbus will keep evolving the design of its A380 superjumbo in response to Boeing’s latest jetliner, the 777X, which has been bolstered by “unacceptable” Washington state subsidies, the head of the European planemaker said on Monday.

Speaking on the eve of the Berlin Airshow, Fabrice Bregier, the chief executive of the plane-making unit of Airbus Group, lashed out at the $8.7 billion in tax breaks as transatlantic tensions flared anew over mutual charges of unfair aid.

Airbus said the 777x presented a challenge to its superjumbo.

“We will face after 2020 the challenge of the Boeing 777X. It is clear that as the challenges evolve, the A380 will have to evolve as well,” Bregier told reporters, without elaborating.

Bregier said he had grown more optimistic about a possible revamp of the A330 wide-body jet because of strong demand from airlines, but insisted no decision had been taken.

Airbus plans to decide later this year whether to upgrade the wide-body jet with new engines to provide fuel savings and better compete with the Boeing 787 Dreamliner.

“I am probably more optimistic than I was in January because, in January, I discarded the idea, but I can’t tell you whether we will launch it or not,” Bregier said.

Reuters reported on Friday that the European Union is considering raising the stakes in the world’s largest trade dispute by challenging the Washington state tax breaks as part of compliance proceedings at the World Trade Organization.

Airbus has said the tax breaks distort the economics of building Boeing’s largest ever twin-engine jet in the state, where most of its commercial operations are based.

Boeing has denied this and said the aid was available to all aerospace companies in the state, including Airbus suppliers.

Bregier reacted angrily to Boeing’s statement that it only receives a “fraction” of the state tax incentives.

“This is bullshit,” he told the press briefing.

He called on the European Commission to do more to level the playing field against what he saw as unfair competition, and also urged monetary authorities to increase support for European exporters with their currency policies.

“Europe is the only part of world that doesn’t look at its currency from the point of view of support to its export industry,” he said, noting the Japanese yen had been sharply devalued because of action from policymakers.

“We can sustain an exchange rate of $1.35 – above it is different – but I believe that an acceptable exchange rate for European exporters is $1.25,” Bregier said.

He added that Europe had to gain credibility in the way it managed its currency.

Boeing Vs Airbus: The Grisly Battle For The Gulf