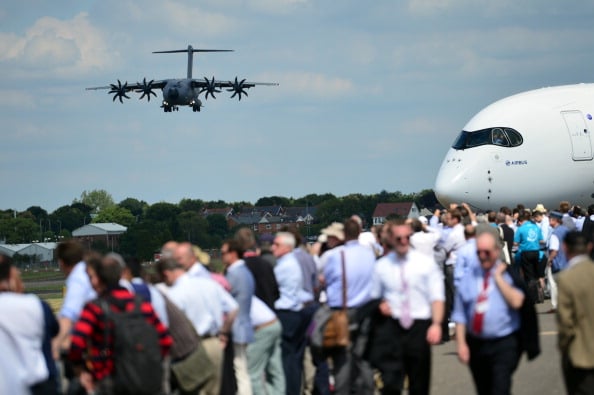 Airbus and Boeing climbed close to the $100 billion mark for plane deals at the Farnborough Airshow on Wednesday, demonstrating healthy demand for new passenger jets despite concerns raised by their already record full order books.

Recent profits warnings from the likes of Lufthansa and Air France-KLM have stoked fears of a sharp slowdown in demand for new aircraft or even cancellations.

On Wednesday, however, Gulf carrier Qatar Airways finalised a $19 billion order for 50 Boeing 777-9 X planes and added options to buy a further 50, potentially doubling the size of the deal.

Canada’s Bombardier also reached the 500 mark for deals for its Q400 turboprop model and for its CSeries airliner as it announced three contracts involving 20 aircraft on Wednesday.

Aircraft leasing firms also continue to splash out, dominating orders at the world’s biggest air show this week as they bet on years of growth in emerging markets in the Middle East and Asia.

Reflecting the flurry of activity around chalets in the first three days of the show, the biennial event has already outsold the 2012 show which saw $72 billion of orders and commitments. The tally hit $135 billion at last year’s Paris Airshow.

Such deals range for provisional letters of intent to firm orders, and can include the announcement of transactions that may have been listed in order books to unidentified buyers.

Airbus has racked up around $60 billion in orders and commitments at the show, highlighted by this week’s launch of the A330neo twin-aisle jet, a re-engined, more fuel-efficient version of its popular A330 series.

Boeing led the order race ahead of the event, gaining 649 net orders as of July 8 versus 290 for Airbus.