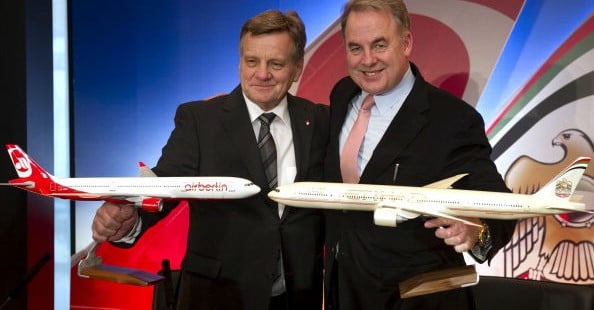 Shares in Air Berlin rose after Germany’s second-biggest airline reported its first operating profit in five years, boosted by the cash sale of a stake in its frequent flyer programme to its key shareholder, Etihad Airways.

Air Berlin, which is almost 30 per cent owned by Abu Dhabi-based Etihad, has not made a full-year operating profit since 2007 and the result also beat analysts’ forecasts for a loss of around 127 million euros, according to Thomson Reuters I/B/E/S Estimates.

Air Berlin carved out its “topbonus” frequent flyer programme late last year and sold 70 per cent of it to Etihad in a 184.4 million euro deal that was designed to give a shot in the arm for the loss-making carrier.

“What is surprising from the announcement last night is that if they hadn’t done the topbonus deal, if you removed 184 million euros, then they’d have negative equity,” according to an analyst who declined to be identified.

Lufthansa, its bigger German rival which disclosed key 2012 figures on Tuesday, said sales rose 4.9 per cent to 30.1 billion while operating profit dropped by a third to 524 million.