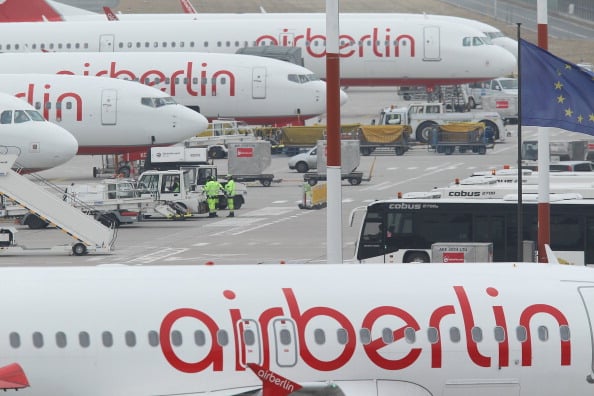 Germany is blocking Abu Dhabi-based airline Etihad from selling tickets for some flights operated by partner Air Berlin, meaning the German airline could lose out on passengers it needs to fight its way back to profit.

Air Berlin, in which Etihad owns a 29 per cent stake, said on Friday that 34 so-called codeshare flights with Etihad for its winter schedule had failed to win the approval of the German federal aviation authority (LBA), despite having been cleared in the past. The flights account for around 46,000 bookings.

Etihad and Air Berlin have in the past shared codes on flights to around 60 destinations, meaning their number of shared flights will more than halve.

By putting its number on the German airline’s flights, Etihad can sell those connections to its customers and thus help loss-making Air Berlin to fill its planes.

Etihad is under investigation by German authorities over whether it exercises too much control over Air Berlin. For Air Berlin to maintain its European operating licence, it must be majority controlled by European investors.

The LBA checks codeshare deals every time airlines submit winter and summer schedules for flights to and from Germany.

A spokesman for the transport ministry said the 34 codeshare requests were rejected based on the traffic rights agreement that exists between the Germany and the United Arab Emirates.

The two airlines have shared flight codes since 2012. Air Berlin said it could not understand the decision because the LBA had approved all six previous schedule proposals involving the codeshares.

“This decision does not reflect our legal position and will shake the trust of passengers in these flight connections, which have been available for a long time,” Air Berlin Chief Executive Wolfgang Prock-Schauer said in a statement.

Air Berlin made its first annual net profit in five years in 2012, but only after Etihad bought a majority stake in its frequent flyer programme.

The German airline has previously said it expects codeshares to bring it and Etihad additional revenue of 200 million euros ($253 million) in 2014, with over half going to Air Berlin.

Air Berlin said passengers on the flights affected would still fly but would receive new tickets without an Etihad flight number. Flights for which codeshares have not been approved include Berlin and Stuttgart to Abu Dhabi, plus flights from Berlin to northern Europe, a spokesman for Air Berlin said.

“As the financial impact will be borne mainly by Air Berlin, the airline will take all legal steps within its power to fight this decision,” Air Berlin chief executive Wolfgang Prock-Schauer said in a statement.