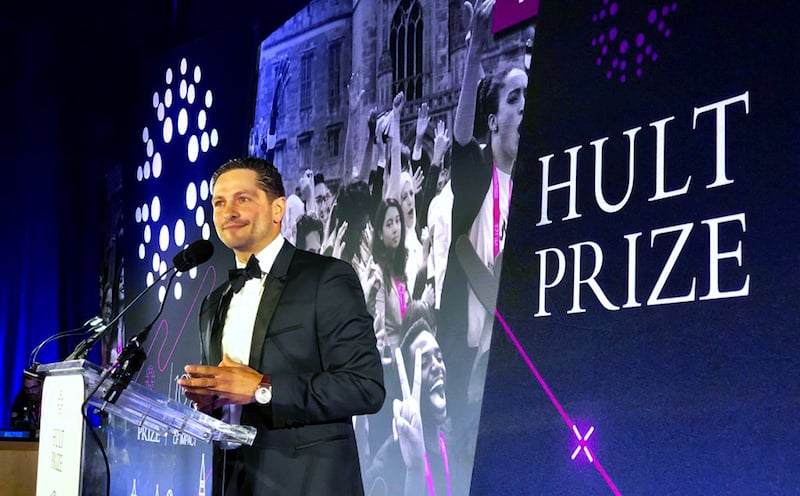 “If we had another 50 brands like Falafel Inc [a restaurant chain Ahmad Ashkar help set up in 2017], the refugee crisis would stop, full stop,” asserts the 36-year-old serial entrepreneur to a crowd gathered to hear him speak in Georgetown.

Arguably, it is this mentality and push for a new kind of business model that has made Ashkar the de facto leader of a new kind of system known as ‘impact business’. At the root of this new model is the Hult Prize, which he founded 10 years ago, and is now one of the most well-known and sought-after accolades for university students around the world. The venture goes further than most student awards, and rather than simply bestowing merit for great business ideas, it supports ideas which have a positive impact on society, the environment and the world-at-large. It then goes even further, by giving students the support network and funds to help make those ideas become a reality.

“The future of business is impact centred, profit-minded, and market-driven,” Ashkar says, “what we do with the Hult Prize is give those who participate access to a support network, and for the winning team we help to accelerate growth through mentorship and funding.”

Indeed, this may seem like an unusual project for a man who built his career on Wall Street, but according to Ashkar, his experience in the financial world helped him gain the mindset he has today.

“I wasn’t always this shared value economy guy,” he explains. “I actually began my career on Wall Street, and I enjoyed it.”

The Palestinian-American businessman spent years working as an investment banker, and as early as age 25, he was “one of the top investment bankers trading commercial mortgage-backed security,” trading billions between the Middle East and the US each year. However, before he turned 30, the financial crash happened.

“A lot of people were looking for meaning after the crash,” he says.

He continues: “March 6, 2009, is a day I won’t ever forget…I had a portfolio of over three billion dollars and a pipeline three times as big, getting paid commissions on every deal, and then the market all came crashing down. I laid off 50 people overnight and then began to rethink everything, and I said ‘there has to be more, but what is it?’”

In response, Ashkar went back to business school, and in the process, began to rethink his approach. “People were making lots of money and coming up empty… [I began to realise] that there is no better gift to humanity than helping the world and impacting people’s lives.”

By 2010 Ashkar had set up the Hult Prize to help achieve this goal. Interestingly, he is quick to assert the difference between Corporate Social Responsibility (CSR), charity work and the impact economy. “Impact-centred means every decision you make yields a net impact, hiring, research, product service, all of it, and consumer-driven. [But you also have to be] profit-minded. Profit minded means you haven’t built a business that depends on charity. You build businesses that have business models attached to them, which means simply by existing, you generate revenue, and you create impact. All you have to do is exist when your lights go on you don’t have to think. It’s not literally selling a product taking a percentage of profits and donating it. That’s 1.0, it needs to be designed for impact,” he explains.

One of Ashkar’s most famous and vocal supporters is former US President Bill Clinton. Since 2010, Clinton has been a key part of the Hult Prize.

“I wasn’t exactly sure then – I knew we were having impact – but it wasn’t until around 2017 that I realised why Bill Clinton had the foresight to tell us and tell the world about us,” he explains.

Fast forward a few years, and the Vatican asked for Ashkar’s help setting up a similar project, known as the Laudato si’ Challenge, which aims to empower young people to solve climate change and migration issues. “It was at this point I realised, we’ve got politicians, religious institutions, and people around the world talking about young people and developing businesses that both serve humanity and serve capitalists simultaneously,” he says.

Since 2012, Clinton has become a key part of the Hult Prize, choosing the theme each year, and announcing it at a United Nations event, which has helped garner public attention for the event.

From prize winners to million-dollar businesses

“We focus mainly on university and college students around the world. We have multiple cities which include Boston, San Francisco, London, Dubai, Shanghai and São Paulo Brazil,” says Ashkar.

But he’s also keen to talk not just about the reach of the competition, but the success stories which have resulted from it. Each year, the competition has a different focus, and in 2013, the theme was sustainable food sources. A group of MBA students from McGill University in Canada came up with a business model centred upon insect protein. Within a year of winning the prize, the group launched their company under the name Aspire and set up two pilot farms, one in Ghana growing weevil larvae, and a cricket farm in the US state of Texas. “One of their key products is cricket protein, which is produced as a colourless powder,” Ashkar explains. “Normally, one gallon of protein equals 2,500 gallons of water to make. However, one gallon of cricket protein equals just one gallon of water.” Meanwhile, Aspire’s farm in Ghana focuses mainly on the local market, bringing jobs and cheap, nutritious food to rural communities in the country. The business is highly profitable too. “They’ve got an evaluation today of well over $100,000,000, and they started with nothing.”

Ashkar continues. It’s resulted in personal success for the founders too, and “they’re each now millionaires.” Indeed, two of the founding team, Mohammed Ashour and Shobhita Soor, were also recognised in Forbes’ “30 under 30” list in 2016 for Social Enterprise. Another recent project which has been highly successful was led by the 2016 winners of the competition. Wycliffe Omondi and Sonia Kabra led a team which looked at how to connect rural and urban areas for increased prosperity. The product they developed was Buu Pass, which is now, Ashkar explains, “one of Africa’s largest transport companies.”

In 2018 the team won a contract making them the official ticketing agent in Kenya. “Their technology connects people in rural and people in urban for increased economic opportunities for the whole of Kenya, that’s the power of the Hult Prize platform,” says Ashkar. “The world is changing right now. By 2060, $60tn will be transferred from our parents, grandparents and great grandparents’ generations to Millennials,” says Ashkar. “The first five trillion, by 2022. What does that mean? It means the people controlling the money will be in charge. And why does them being in charge matter? Because Millennials make decisions differently than every single generation before them.” According to Ashkar’s Hult Prize data, and research carried out by Nielsen Global Research – who specialise in consumer behavior – eight out of ten Millennials choose brands that they perceive as impact-driven when given a choice between them and similar, non-impact driven brands. Moreover 60 per cent of Millennials are willing to pay a premium for sustainable products and services, a number which, according to Ashkar’s research, is “going up every single day, every single year.”

The business model for entrepreneurship of the future is changing, he argues. “It’s not just how much money goes to your bottom line; you can achieve market validation and maximising shareholder wealth, which is what every business is meant to do: maximise shareholder value by achieving impact.” His message to corporations is clear: “the lines between social entrepreneurship versus regular entrepreneurship are no longer black and white – they’re coming together as one. If you want to be relevant in the next decade, I assure you look at the data. It’s not just Millennial purchasing behavior, either. [I was] born in 1982, so I’m on the very tail end of the Millennial generation, and some of my friends are now taking over companies. I have friends that now run publicly traded Fortune 1000 companies; they’re my age, they’re making decisions differently.”

Indeed, he also points to the potential growth of the impact market, which already stands at $8.7tn globally. According to Ashkar, this is something businesses in the Middle East should take note of, too. On a recent visit to Palestine, he discussed with a group of business leaders and students how to maximise entrepreneurship in the Middle East. “Arabs were the original entrepreneurs,” he says.

Speaking specifically about Palestine, “we have a preconceived idea of who we are and where we can do business, but every part of our culture can be a billion-dollar business idea.” He also highlights the role governments can play in the region. “Governments are extremely visible within the private sector in many Middle Eastern countries, which gives them a unique opportunity to be leaders. They have the opportunity to create a new culture where social impact is weaved into the DNA of a company.”

In 2017, Ashkar saw a unique opportunity in the US market which could both help refugees and provide the local community with a cuisine he knew a lot about – delicious, home-cooked Palestinian food. The result was Falafel Inc.

“With Falafel Inc, we’ve built a business model that validates the fact that the future of business is impact business. Within the first six months of opening, we fed over 35,000 refugees. We employee two refugees full time,” he explains. The project is also verified with the World Food Programme, with the agreement between the restaurant and the organisation on the wall of each store. Ashkar jokes that if one of the restaurants failed to keep the agreement that it would mean the UN could “technically sue them.” The company also has plans to expand from their current two stores to around 100 stores around the world. Current projects are planned for Dubai and Amman in the Middle East, as well as two locations in the US (in Boston and California) and one in Mexico City. “When we reach 100 stores, we will literally be feeding more than five million refugees a year, every store employees about ten. We have publicly traded companies trying to acquire our brand today – what that means is the idea of social innovation premium is true.”

So what is at the core of Falafel Inc’s success? Arguably, keeping things simple – the original falafel recipe at the restaurant is one that was passed down from his Palestinian mother, from her mother, and so on within the family. And terms of a business plan, the concept was written for impact business: a model which is consumer-driven, and economically viable, with impact business at the core of everything the company does. Indeed, as Ashkar asserts: “impact is changing everything we know – or used to know, about business.”