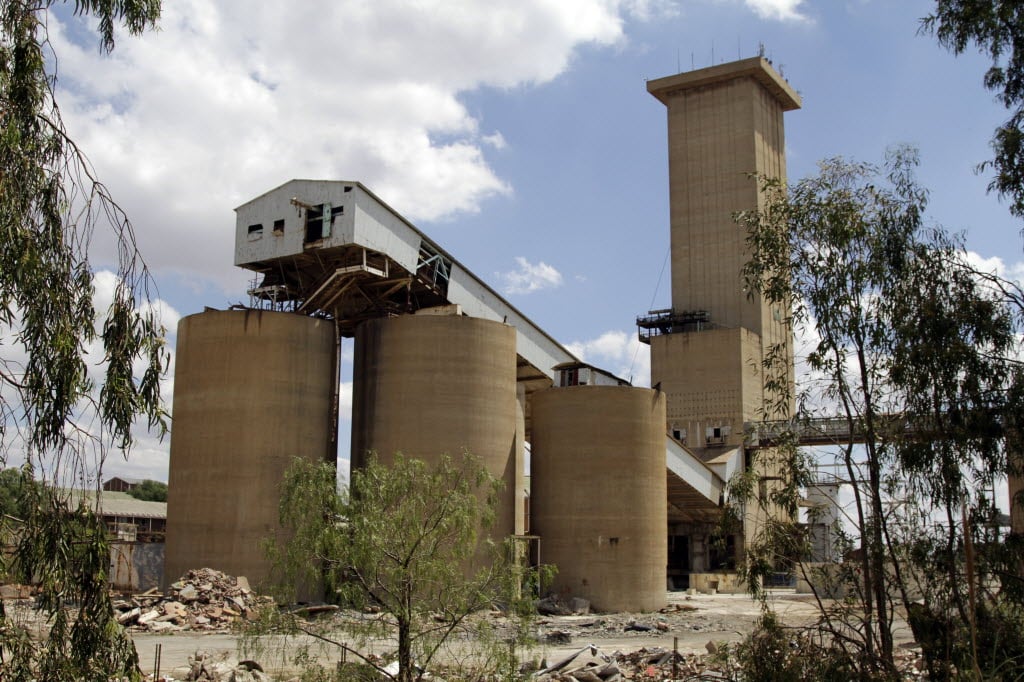 A half-dozen unemployed workers from the Blyvooruitzicht gold mine southwest of Johannesburg finish off the last scraps of a slaughtered cow in the searing October heat. Since losing their jobs in August, meals have become much less predictable.

The men stand near a small wood fire as the sun shines off a hill of extracted earth, in sight of a housing block that was supposed to be vacated. One holds a jaw bone over the flame, nibbles the meat off, and tosses the rest into a rusty barrel. What’s left of the carcass with its entrails spilling out is starting to dry at their feet.

The scene, resembling something from an apocalypse film out of Hollywood, is an extreme example of the impact gold’s 25 per cent drop this year may have on towns around the world that are dependent on the precious metal. Mining companies have announced plans to shutter mines or reduce operations from Nevada and Peru to Papua New Guinea in the Pacific Ocean, as gold heads toward its first annual loss in 13 years.

No well-known mining companies have shown an interest in the mine, though this month buyers have surfaced, according to one of the liquidators.

“We are not sleeping at night,” said Vuyani Matsorwana, 28, a father of two who says he lost his job in a round of lay- offs last year and was rehired weeks before Village pulled out.

Now idled, few of the men have resources to leave the area. Some were squatting in mine-owned housing near the once bustling shafts that took them deep below the earth’s surface in search of gold. They hang around the increasingly ghost-town-like grounds, stewing and watching out for armed scavengers who hunt for gold specks and less glittery metals like copper and iron.

South Africa, home to one of the world’s richest reserves, has been hit hard. Gold’s decline this year is the biggest drop since 1981. The gold mining industry eliminated 14,461 positions in the first nine months of the year, bringing the total remaining jobs to 126,587 in September, according to Statistics South Africa, the state statistics agency. The industry has been reeling from labor strikes that have swept the country.

The end of gold’s 12-year bull run also compounded the impact of rising operating costs as mines aged and companies had to dig deeper to find better grades of ore. After more than a century as the world’s biggest gold producer, South Africa has slumped to sixth position.

The Blyvooruitzicht site, also known as Blyvoor, is situated in the Witwatersrand Basin in central South Africa, a geological deposit billions of years old that’s produced as much as half of all gold ever mined. Though production peaked in the 1970s, the area remains home to some of the biggest assets owned by South African companies including AngloGold Ashanti Ltd. and Harmony Gold Mining Co.

After production started in 1942, profits from the Blyvooruitzicht mine flowed through the mining village and the town of Carletonville, four miles away. Within a decade, Blyvooruitzicht was said to be the most profitable gold mine to date, according to the 1968 book Golden Age, chronicling South Africa’s mining industry. Dividends of 100 percent or more were paid out for five straight years, the book said.

The mine’s successive owners provided housing and daily meals, allowing employees to send most of their earnings home to wives and children.

In 2010, when Matsorwana started working there, much of the infrastructure built during Blyvoor’s rise remained, including 1,000 homes, 290 family units in a converted hostel and an all- male building with about 1,850 residents.

The company installed a golf course, and a recreation center where a drama about a mining community was filmed in the 1970s, the first days of television for most South Africans. Landscaped gardens decorated intersections down the village’s main street.

Blyvoor was partly crippled in 2009, when a seismic shift knocked out access to some of the gold. It recovered, and since 2011 its financial stress resulted mostly from the declining gold prices and an increase in local electricity costs, said James Duncan, a spokesman for DRDGold Ltd., which owned the mine before the planned rescue by Village Main Reef.

The company, which specializes in taking over older mines, was undeterred. Village Main Reef officials forecast they could keep it operating profitably until 2030, if not longer. The company invested 190 million rand ($18 million) in the site, taking operational control in June 2012.

“Blyvoor can be a good transaction if the gold price stays favorable and we can do the things we hope we will find the opportunity to do there,” Bernard Swanepoel, Village Main Reef’s chief executive officer at the time, said in an interview with Mining MX magazine in November 2011. If prices were to fall below a certain level, he said, “we would be in the dwang” — local slang for muck.

The price of gold was $1,715.67 an ounce when Swanepoel, now the company’s non-executive chairman, made the forecast. By the end of June this year, a month before Village pulled funding, prices had plunged 29 per cent. (It closed at $1,230.10 in New York yesterday.)

Blyvoor was struck by another seismic shift, and more strikes. The mine lost 90 million rand in the quarter ending June 2013. Village cut its financial assistance to Blyvoor on July 30, and a court approved it for provisional liquidation a week later.

“Based on the review we did, we were confident that there was a viable operation at the time,” Village CEO Ferdi Dippenaar said in an e-mail.

The unemployed miners these days hang onto any reason for optimism, hoping for a rescue despite declining prospects at other mines. Village shut down another site about 60 miles away at Buffelsfontein. Johannesburg-based AngloGold Ashanti and Harmony Gold also have cut spending.

In the last two weeks, two deals have been entered into for the mine and the real estate at Blyvoor, subject to a number of conditions, said Leigh Roering, a director at Harvard Corporate Recovery Services, one of the liquidators. He wouldn’t name the buyers, and said he couldn’t say how many jobs might be saved.

Today the area is falling into ruin. It took as many as two months for workers’ final pay checks to be delivered, and the money didn’t last long. Meals at the hostels ended a month after the liquidation began, said Mthuthuzeli Naki, regional organizer for the National Union of Mineworkers.

Over the last failing months of the mine, the company bulldozed about 10 narrow, two-story structures to dislodge people who were living there illegally. The remaining rubble is worked over daily by small groups of men who break apart concrete slabs to harvest scrap iron. Next door, another complex of buildings occupied by mine workers a generation ago stands empty, fading behind tall grass where cows graze.

Most of the people remaining at the mine are surviving on slim unemployment benefits, money sent by relatives or, in the case of the few who qualify, pensions, Naki said.

Matsorwana says his father got contract work on a skeleton crew paid to keep the mine from flooding and damaging nearby operational mines. After the mine shut, the two were carried through the first months by his brother who works a few miles away. They still had to cut their meals to one a day at times.

Their daily struggles are compounded by the zama zamas, a term for illegal miners that locals also use to refer to cable thieves. Surrounded by mounds of chalky gray rock next to one of Blyvoor’s abandoned shafts in October, men wearing blue or green coveralls, some with ski masks, searched for gold using hard hats to sift through fine wet gravel.

Others descend on any building left unattended even briefly, stripping water pipes, electrical wiring and anything else they can sell to nearby scrapyards for cash, according to Matsorwana and other unemployed workers.

At Hostel No. 3, where Matsorwana and his father were living together in October, there was no running water or central electricity. Plumbing to the showers, sinks and toilets was stripped out along with a heater in a room where church services were once held.

The hostel’s current residents, who say they are allowed to stay for now, are probably its last. The spare quarters with their linoleum floors and narrow living spaces still retain personal touches that make them homey. Family photos grace the faded walls. Residents haul water from the apartment block next door using plastic buckets stacked against the walls.

They’ve cobbled together makeshift power lines of extension cords running to other buildings, or they burn paraffin lamps. They try to chase off thieves and stick together if they spot scavengers they say are known to carry weapons.

Things have deteriorated recently. Just this weekend, security guards were shot dead at the mining shaft, Captain Jabulani Kundethe of the Carletonville Police said in a phone interview. He declined to give more details.

“At the moment it’s very sensitive and serious, things are getting out of hand,” he said.

In October, Matsorwana said he recognized a number of the thieves and understands their desperation.

“Some of them were also in the mine, but they try to have some food in their houses,” he said.

Local businesses are also feeling the pain of lost jobs.

Desiree Barreiro and her husband have owned the Blyvoor Spar grocery store for 32 years. It gets business from employees of other nearby mines too, but Blyvoor workers were always frequent shoppers. Now their shopping lists are reduced to essentials. Meat sales are down and bread is a big seller.

“You can see the despair on their faces,” said Barreiro, adding that even customers who are still employed are being careful. “People are afraid to spend extra money.”

Other evidence of the region’s gold-mining legacy hangs in the air: dust laced with toxic chemicals such as uranium that have been unearthed with the gold.

In the afternoon, sunlight glows through the dust that hangs like a gold mist in Barreiro’s store.

“You can’t get rid of it,” Barreiro said, adding that she’s been sensitive to health issues since recovering from leukemia. “The wind keeps blowing it in here non-stop, and you constantly have to mop.”

On a Sunday, when the Blyvoor Golf Club’s greens should have been bustling, the locker room was empty. Only a grounds crew and a lone golfer were visible on the fairways.

The 18-hole course opened in 1939. Mine owners had paid for the club’s upkeep until this year, says Paul Putter, president of a committee of members operating it.

“When the mine looked after it, the course was in excellent condition,” said Putter, 60.

The zama zamas have done their damage here too, stripping the main water-supply pump and taking even small items, like greens flags for their poles. While Putter, who owns an engineering company, said he solved the water supply issue on his own, reviving the fairways to a proper shade of green, the club needs more than $10,000 a month to cover its costs.

“What I’m hoping for now? That there are some people interested in the mine,” Putter said.

Back at Hostel No. 3, some of the older unemployed miners fear their age will be an obstacle to getting work. Bandile Mlukwa, 58, worked at Blyvoor for 15 years as a security guard. He supports a wife and six children in Willowfontein, more than 400 miles from Blyvoor.

“It’s difficult to have hope, especially because I still have the will and strength to work,” he said. “But my age is a factor that will make me less attractive to employers.”

Matsorwana moved on earlier this month, accepting a lower- paying job driving a front-end loader on a construction site about an hour away in a Krugersdorp township.

He would return if a job opened up. Mine work is better, he said: “They have benefits.”