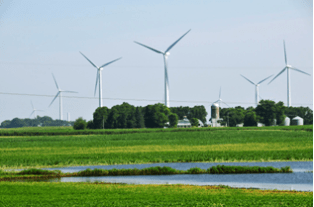 Abu Dhabi National Energy Company (TAQA) has announced plans to acquire a 50 per cent interest in the Lakefield wind project in the United States.

TAQA said it is buying the interest from a subsidiary of France-based utility Electricite de France SA (EDF), but did not disclose financial details of the transaction.

The fully-operational Lakefield wind project, located in Minnesota, consists of 137 GE 1.5 MW wind turbines with the total capacity to generate 205.5 MW of electricity for more than 68,000 homes.

The electricity is sold to Indianapolis Power & Light Company, a subsidiary of the AES Corporation, under a 20-year power purchase agreement.

The Lakefield wind project has been supplying the regional transmission system covering the Midwestern US and Manitoba, Canada since 2011, a statement said.

Under the terms of the agreement, EDF will continue to provide operation, maintenance and related services.

Dr Saif Al Sayari, TAQA’s executive officer and head of the Energy Solutions division, said: “The Lakefield acquisition is a first step in the evolution of TAQA’s global strategy for alternative energy sources. It complements our existing assets in North America and gives us a foothold in the fast-growing global wind market.

“The knowledge and international footprint established with this transaction will enable us to take a leading role in developing other international projects.”

TAQA produced 88,100 barrels of oil equivalent per day in 2011 through its current operations in western Canada and the northern US. The company also has an interest in a tolling agreement for the Red Oak power plant in Sayreville, New Jersey.

The acquisition of the Lakefield wind project is expected to close in the first quarter of 2013, subject to fulfillment of conditions, including customary regulatory and third party approvals.

The agreement follows the launch of TAQA’s Energy Solutions division in January 2012, which was established to invest in alternative energy projects such as wind, solar, geothermal and hydropower, and unconventional fossil-fuel projects such as shale gas and using CO2 for enhanced oil and gas recovery in TAQA’s existing geographies.

Production on the block is expected to start in 2013.