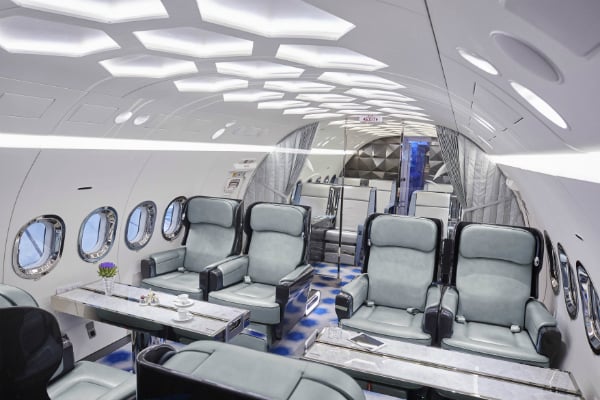 Royal Jet’s Boeing Business Jet fleet will soon grow to eight aircraft as it embarks on a ‘new era’ of luxury travel.

New president and CEO Rob DiCastri briefed a select group of media in Abu Dhabi on Wednesday before the first of the two took to the air on a 80-minute flight (the second is due to arrive later this month).

With an indulgent front end bedroom and en suite washroom and toilet, eight VIP, eight business class and 18 standard seats, the 34-seat, custom-made B737-700 jet takes travel to sky-high luxury levels, although arguably it’s not the most luxurious in the fleet (A6-DFR has just 19 seats).

New York-based designer Edése Doret oversaw the plush interiors, which feature plentiful chrome and carbon fibre, and fit-outs were carried out by Lufthansa Technik. Both aircraft will offer similar capabilities and capacities but have different colour schemes.

“These will be the first two Boeing Business Jets globally to have KA band internet which is high bandwidth allowing live TV and internet streaming,” said DiCastri. The 3,900nm-range planes – list price of 60m – will most likely fly on popular routes to London, Europe and Singapore. 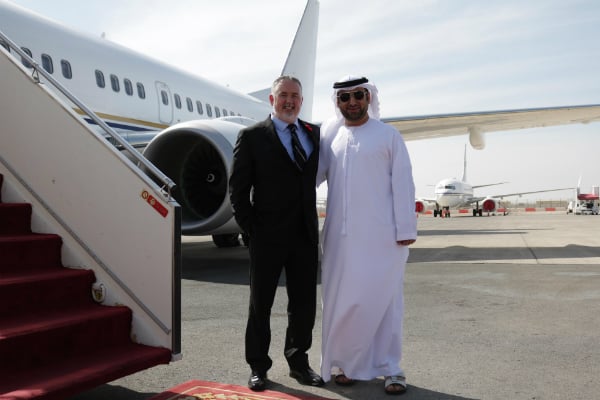 With two Learjet 60s and one Gulfstream 300 up for sale, DiCastri sounded a note of caution about future expansion and the market’s outlook. He said the trio weren’t reaching satisfactory levels of utilisation, have been predominantly used for medi-vacs, and that business is very unpredictable. “We have offered to take them back on management as we know the aircraft very well and would rather keep them in our fleet.

“We want to grow, we have a good-sized fleet now and our utilisation is high. But the days of ordering an aircraft and getting it in, and hoping you have enough business for it, are behind us. The pie has shrunk, but the competition is fierce.”

New opportunities are also arising with a growing brokerage business. “We’re getting all sorts of requests we can’t handle, and we’re taking that business and brokering to other operators.

“Corporate business has been good, it was a good summer which continued into the fall, with different customer types, it was a nice spread and we want that diversification.”

To recline on a large bed, and look out the window as the plane glided over the UAE, was one of those pinch-yourself travel moments. As we landed, we passed a solitary Etihad A380 with its Residence on board; this configuration takes it to an even more exclusive level. 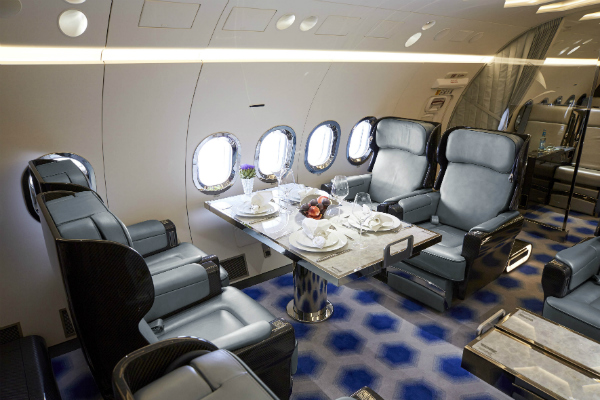 I liked the VVIP area in which the marble table folded up, and wide seats went into flatbed mode quickly with the touchscreen on the side. There were other distinctive elements that befit private jet travel; the ease of walking to/from the aircraft, the absence of overhead luggage bins, no seating numbers and of course, the luxurious fittings and space. If I had to pick flaws, the pull-out IFE screen was the kind you might find on any scheduled airline – and unfortunately the WiFi didn’t work on our flight. DiCastri said passengers will be offered iPads.

The ‘standard economy’, for VIP entourages, looked perfectly comfortable, probably on a premium economy level and the food we were served – chicken satays and peanut sauce, prawn sandwiches and the like – was faultless.