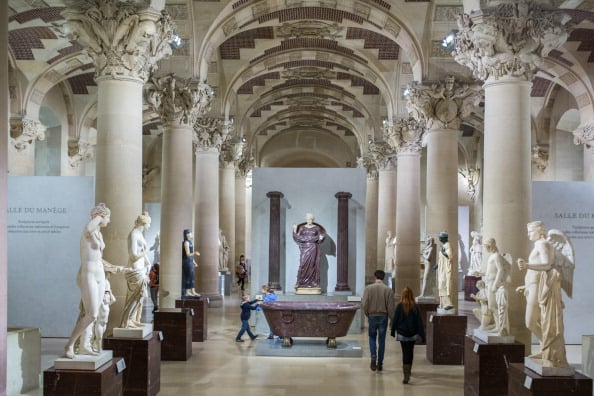 Abu Dhabi hopes eventually to lure tourists to its own branch of the Louvre museum, but pending its opening in 2015 some of its treasures have gone on display at the place that inspired it – the Louvre in Paris.

“Birth of a Museum: Louvre Abu Dhabi” is a presentation of works from across the globe, part of the Abu Dhabi museum’s permanent collection which has been built up with the help of advisers from the Paris Louvre.

Highlights include a gold bracelet decorated with lion heads crafted in Iran nearly 3,000 years ago, a Virgin and child painting by Giovanni Bellini and paintings by Pablo Picasso and Henri Matisse.

Backers hope the pieces, once returned to Abu Dhabi, will help create a cultural hub in the Gulf Arab state.

There they will bask under a giant dome by architect Jean Nouvel in a 64,000-square-metre (690,000-square-feet) museum, one of three museums planned on an island near the centre of Abu Dhabi, the capital of the United Arab Emirates. They form part of a wider plan to boost the tourist credentials of a country heavily dependent on oil.

Although the deal to open a Gulf branch of the Louvre originally sparked some concern that France was signing away its cultural heritage, such worries were brushed aside as French President Francois Hollande inaugurated the exhibition in Paris on Tuesday.

“For France, the Louvre museum in Abu Dhabi is an exceptional building site,” Hollande told the project’s backers, including a delegation from the UAE.

“It’s the biggest cultural project that we’re undertaking abroad. It’s also the most symbolic manifestation of the tight partnership which binds us to the United Arab Emirates.”

Exhibition curator Vincent Pomarede told Reuters the idea was to create a diverse collection in which the visitor could trace artistic developments across cultures and centuries.

“Their project is global,” Pomarede said of the museum set for a December 2015 opening. “The name of the Louvre is a mark of quality for them, a mark of high standards of professionalism in the teams who work there and the collections housed there.”

Despite the comparatively conservative culture that prevails in the UAE, Pomarede said French teams had not encountered resistance when recommending the purchase of works of diverse religious art or nudes from antiquity.

“The question of censorship in the wider sense came up in our very first meeting with them,” Pomarede said.

“Their response was very clear … ‘We want to make a universal museum, so we want there to be an exchange between different civilisations and cultures so obviously there can be no censorship.’ And we never had any.”

The Louvre is the world’s most visited museum, attracting up to 10 million visitors annually, and the United Arab Emirates agreed to pay 400-million-euros ($553 million) over 30 years to house a branch in a deal signed with the French government in 2007.

The deal will further strengthen ties between the two countries. The UAE is France’s largest trading partner in the Middle East, according to the foreign ministry, absorbing a third of French exports to the region.

Abu Dhabi also hosts France’s only military and naval base outside of Africa, and the only French-speaking university in the Gulf, a campus of Paris’s Sorbonne university.

Conversely, the UAE ploughed some 2 billion euros into France during 2010, primarily in real estate, making it the top investor from the Gulf Arab region, latest data shows.

The Louvre agreement includes sharing expertise in the acquisition of works of art and curatorship, as well as training and apprenticeships for future Emirati curators.

The exhibition in Paris, which runs through July 28, was shown almost in its current form in the UAE in April last year.