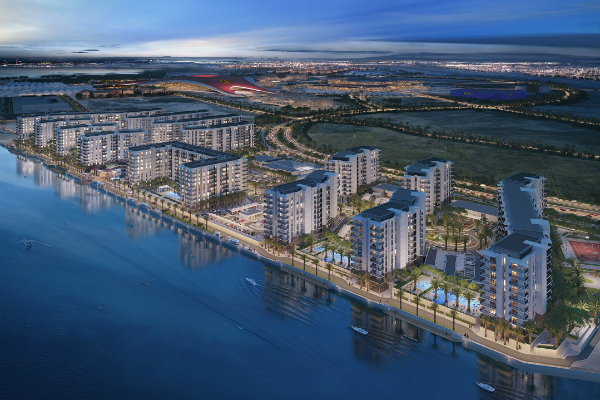 It includes exercise and recreation facilities, restaurants and cafes, retail space and a waterfront promenade.

Aldar said it would release one of the 13 apartment buildings at the development for sale at the Cityscape Global conference in Dubai next week with prices starting from Dhs480,000 ($130,000) for studios.

The towers also include one-, two- and three-bedroom apartments with private balconies and will be surrounded by private courtyards, landscaped areas, pools, multipurpose courts and a mosque.

Work on the project will begin in December with the aim of phase handovers between June and December 2020.

A number of apartments will be reserved for the developer’s growing leased residential portfolio.

“Water’s Edge is the latest chapter in the Yas Island story – bringing high quality waterfront living to the emirate. We are confident that Water’s Edge will complement our existing residential portfolio, and draw a positive response from customers,” said Aldar CEO HE Mohamed Khalifa Al Mubarak.

Aldar has 3,500 residences under development on Yas Island including West Yas, Mayan, Yas Acres and Ansam, with the latter due for handover later this year.

It is also working on the Dhs12bn ($3.26bn) South Yas development, which includes a new campus for media authority twofour54.

The company reported a 5.6 per cent dip in net profit to Dhs620m ($169m) in its second quarter financial results last month