The Abu Dhabi government and the Abu Dhabi National Oil Company (ADNOC) have signed the first of a series of concession agreements with Italian oil and gas company Eni, awarding it a 25 per cent stake in its offshore ultra-sour gas mega project.

The Ghasha concession consists of the Hail, Ghasha, Dalma and other offshore fields and has a term of 40 years.

Eni will contribute 25 per cent of the development cost of the multi-billion dollar project, a statement said.

ADNOC said it is in discussion with further potential partners, for the remaining 15 per cent of the available 40 per cent stake in Ghasha concession earmarked for foreign oil and gas companies.

The Hail, Ghasha and Dalma ultra-sour gas project will tap into the Arab basin, which is estimated to hold multiple trillions of standard cubic feet of recoverable gas.

The project is expected to produce more than 1.5 billion cubic feet of gas per day when it comes on stream around the middle of the next decade. 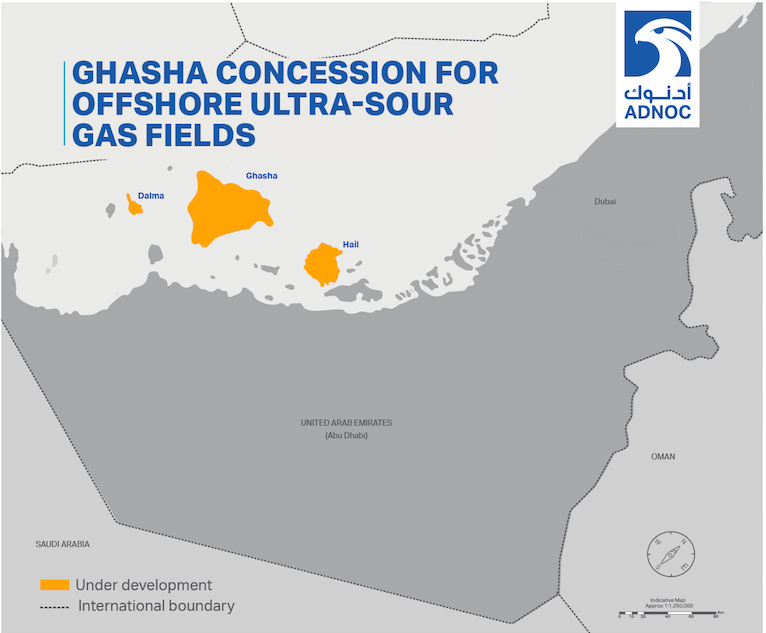 The Ghasha concession is expected to produce enough gas to provide electricity to more than two million homes. Once complete, the project will also produce over 120,000 barrels of oil and high value condensate per day.

Over the project’s life-time, “substantial benefits will flow back into the UAE economy” including commercial opportunities for local businesses, the statement added.

Dr. Sultan Ahmed Al Jaber, UAE minister of state and ADNOC group CEO said: “In combination with ADNOC’s experience in ultra-sour gas, Eni’s field development experience supports the accelerated delivery of gas from the Hail, Ghasha and Dalma fields. At the same time, it will enable the further optimisation of costs and ensure we extract the maximum value from our gas resources.”

The awards marked the first time an Italian energy company had been given concession rights in Abu Dhabi’s oil and gas sector.

Al Jaber added: “ADNOC is committed to ensuring a stable and economic gas supply to the UAE, which is a core component of our 2030 strategy. Development of our Hail, Ghasha and Dalma ultra-sour gas offshore resources, at commercial rates, will make a significant contribution towards delivering that strategic imperative.”

The latest announcement comes after the Supreme Petroleum Council approved ADNOC’s new gas strategy, which aims to help the UAE moves towards gas self-sufficiency and make the country a net gas exporter.

Along with developing the Ghasha concession area, the company also plans to increase production from its Shah field to 1.5 billion cubic feet per day and move forward to develop the sour gas fields at Bab and Bu Hasa.

The company said it will also seek other sources of gas including Abu Dhabi’s gas caps and unconventional gas reserves, as well as new natural gas accumulations which will continue to be appraised and developed.

ADNOC said LNG was the fastest growing hydrocarbon, with a growth rate of 4 per cent per year and demand expected to exceed 500 million tonnes annually by 2035 from 300 million in 2017.