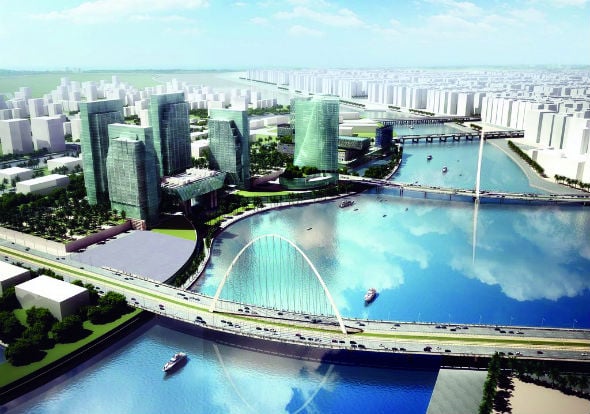 It’s safe to say the first thought on everyone’s mind was: how would it rival DIFC?

The Dubai International Financial Centre has been the region’s financial hub since its creation in 2004. Although there are zones in Bahrain and Qatar, Dubai has long been ahead of its challengers. But that could all change later this year.

Scheduled to open in the fourth quarter of 2013 on Al Maryah Island, GMAD will offer financial services from banking to fund management with an expected focus on commodities trading. It will also, like DIFC, have its own courts and financial regulator.

“The formation of GMAD is an exciting development in the Abu Dhabi market as it brings a new dimension to the economy here,” said Stephen Forster, partner and head of the Abu Dhabi office for legal firm Al Tamimi & Company.

“The laws of the free zone are likely to be based on common law rather than the civil code followed by the UAE. If this is the case then it helps to make the financial zone attractive as the two most commonly used legal systems in financial transaction (English law and New York law) are both common law based and the concepts behind the laws will be familiar to the market.”

Forster’s assertion of how GMAD’s legal focus may be structured suggests a familiarity with DIFC’s courts. Whether that is where the similarities will end or if competition or even cooperation flourishes between the two zones is dividing opinion.

“It will be interesting to see how GMAD sits alongside DIFC – will it compete or will they have their own specialist niches?” he said.

“Specialisation is the only way to survive. The region as a whole can become greater than its individual parts.”

Dr. Nasser Saidi, ex-chief economist of DIFC, echoed the sentiment of cooperation making better business sense for both zones, rather than rivalry.

While the DIFC may have a nine-year head start, GMAD would be fancied to make some quick dents into its neighbour’s market share with the emirate’s asset managers and sovereign wealth funds sitting on the zone’s doorstep, as well as the huge potential of a contract with Abu Dhabi oil.

“To date we still don’t have a regional financial market, we don’t have regional exchanges, and that is a prize still to be taken,” Saidi said.

“Investors from around the world are interested in our region but our markets are closed. Locally and internationally they cannot tap the growth opportunities and companies that are here, so we need to facilitate that.

“My hope is GMAD and its new market will do that. It has not happened with Nasdaq Dubai, so this is an opportunity to get it right.”

GMAD’s board was appointed last month with Ahmed Ali al-Sayegh, chairman of energy firm Masdar, named chairman. Until he and his fellow members begin to announce how GMAD will operate, the desire for cooperation or differing sector focus with DIFC is merely a pipe dream.

However many in the private sector it seems have their fingers crossed for a two-way street.

“We are sensing perhaps there is more willingness to cooperate rather than compete,” said Morris.

“It will be interesting to see what happens, whether GMAD wants to compete directly with DIFC. But I believe the two zones will complement each other.”