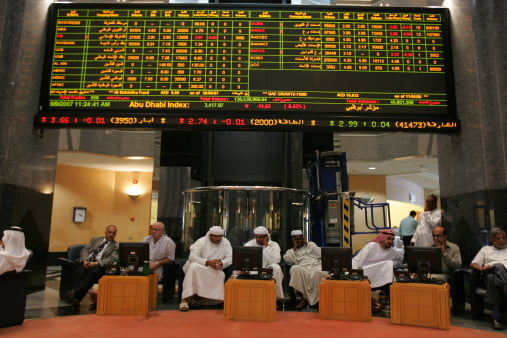 Bank shares rallied ahead of earnings and some extend gains after Abu Dhabi Commercial Bank posted a 32-per cent jump in quarterly profit and proposed a 25-per cent cash dividend for 2012.

ADCB shares rise 2.9 per cent to their highest close since late 2008.

National Bank of Abu Dhabi slips 0.5 per cent, trimming January’s gains to 6.3 per cent. The lender on Tuesday posted a 55-per cent rise in fourth-quarter profit, beating analysts’ forecasts.

“These numbers are a big change for UAE banks – a turning point,” says Ali Adou, portfolio manager at The National Investor. “We saw them spend the last three years cleaning their balance sheet and focusing on asset quality. We’re in a phase where banks won’t be concerned about improving asset quality.”

Other financial stocks also rally, with Abu Dhabi Islamic Bank up 0.9 per cent and Union National Bank climbing 1.6 per cent.

Dubai’s builder Arabtec jumps 5.7 per cent to a six-month high.

Bluechip Emaar Properties slips 0.2 per cent, trimming the month’s gains to 29.9 per cent. The developer has been the main driver for Dubai’s bourse in recent months as investors bet it would benefit from a tentative recovery in Dubai’s property market.

After market hours, Emaar posted a 28-per cent drop in fourth-quarter net profit, missing analysts’ forecasts as costs soared amid a revival of stalled projects.