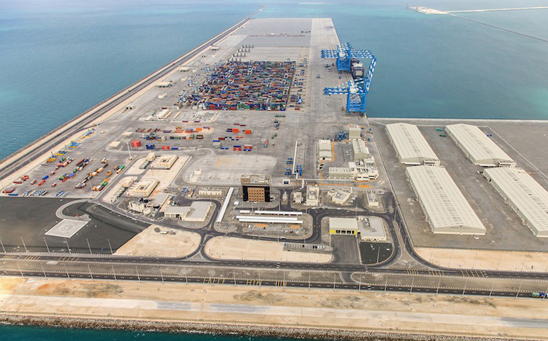 The deal, which includes a five-year renewable period, will see the company operate the terminal from the first half of 2018 with an initial 800m of quay. A further 500m will be added by 2020.

He said the company would divert ships from Dubai’s Jebel Ali port once the terminal was completed.

The concession is worth $738m in total, according to filing by Cosco on the Hong Kong Stock Exchange, and will span roughly 70 hectares with three berths.

There is also the option for a further 600m of quay length to meet anticipated volume growth, bringing the additional capacity to 3.5 million TEUs.

“The signing of the concession agreement between Abu Dhabi Ports Company and COSCO Shipping Ports Limited will significantly expand trade between China, the UAE and the broader region. It will greatly enhance the UAE and Abu Dhabi’s role as a key logistics and trading hub, between East and West and will also serve to further diversify the UAE’s dynamic and growing economy,” said Dr Sultan Ahmed Al Jaber, UAE minister of state and chairman of Abu Dhabi Ports Company.

Cosco chairman Wan Min said the terminal would be the second in which the company holds a controlling interest.