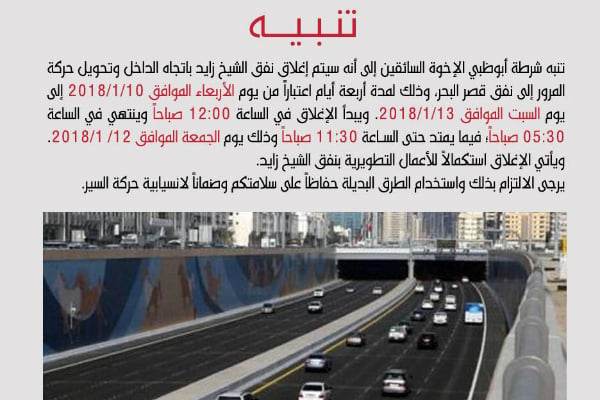 Abu Dhabi Police has announced that a major tunnel linking the city will be closed from Wednesday.

Motorists are warned that the tunnel will be inaccessible in the direction towards Abu Dhabi from Wednesday, January 10 to Saturday, January 13.

Traffic will be diverted to the Sea Palace Tunnel during those times.

The closed lanes were scheduled to reopen today.

Other work includes a 400m slipway between Sheikh Zayed Road and the tunnel between Al Falah Street and Hazza bin Zayed Street that is scheduled to be finished by August 2019.

The Sheikh Zayed Tunnel was completed in December 2012. It has 2.4km of enclosed roads and 1.8km of open sections.