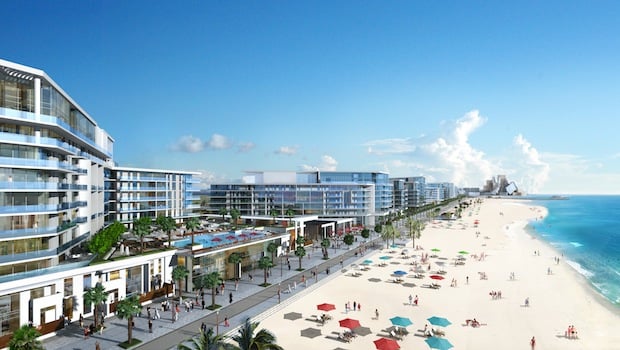 Development work on the mixed-used project – located in the Saadiyat Cultural District – is currently 21.9 per cent complete, a statement said.

Connected to a 1.4km promenade with walking and cycling paths, the project also offers direct access to the beach, children’s playgrounds, and parking for both residents and visitors.

The contract for the project, valued at Dhs1.25bn, was awarded to a joint venture between San Jose Contracting and Pivot Engineering and General Contracting in April 2016.

So far, construction of basement and podium has been completed and work has reached the upper floors in the buildings. TDIC said it is “monitoring and supervising” all the developmental phases to ensure timely execution.

Sufian Al Marzooqi, TDIC’s CEO said, that the project was being executed in line with the pre-set schedule and was on track to be completed in the second half of 2018.

Amna Alalkeem Al Zaabi, project manager at TDIC added: “We are working closely with our contractors to ensure work completion. Mamsha Al Saadiyat enjoys picturesque views, overlooking the seashore and a close proximity to the Cultural District Museums, which differentiates it from any other residential projects in the region.”

“We are anticipating strong interest from the local and international investors,” said Al Zaabi.

The first phase of the project was sold out during a two-day sales launch event in October 2014.