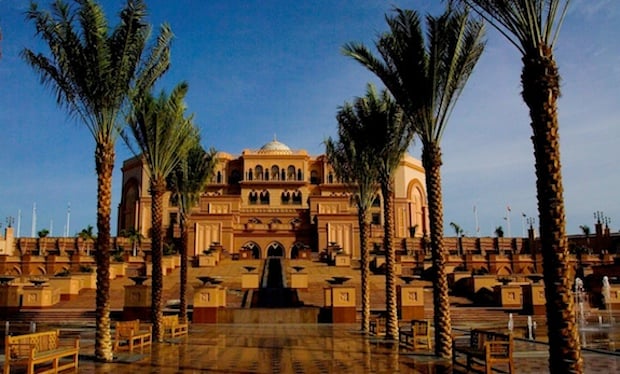 Spread across 141 hotels and hotel apartments, 631,417 guests checked into accommodations throughout the emirate in the first three months, recording a six per cent rise over Q1 2012.

Guest nights rose by 23 per cent while the average length of the stay increased by 16 per cent to 3.36 nights. Total revenues amounted up to Dhs1.432 billion ($389.9 million) recording an increase of 15 per cent.

Strong guest arrivals were recorded during March with total revenues increasing up to 18 per cent year-on-year with average length of stay edging up by 16 per cent and occupancy rising from seven per cent in March 2012 to 74 per cent.

Such strong growth in occupancy can be attributed to four new hotel facilities – two resorts, one in Abu Dhabi city and Al Ain, and two hotel apartments in the capital, opened during the Q1, bringing in an additional 706 rooms into the market. This led to a slight two per cent drop in the average room rate.

“We are starting to reap the benefits of our trade engagement programme which began a year ago and in which 14 destination management companies have been represented,” said Mubarak Al Muhairi, director general, TCA Abu Dhabi.

“The programme has enabled us to reach 4.4 million consumers through joint partner marketing promotions in Australia, UK, Germany and Russia while 27,850 travel agents and agencies have been engaged through promotions and educated on destination Abu Dhabi products,” he said.

The new routes like Etihad’s daily service from Amsterdam, touted to begin next month, along with Sao Paolo in June, are expected to increase tourism to the city.

Domestic tourism continued to be Abu Dhabi’s biggest source of hotel guests though it dropped five per cent compared to Q1 2012.

The largest number of Abu Dhabi visitors hailed from the United Kingdom, followed by India and Germany.

“We anticipate strong visitor appeal coming from the Birth of A Museum exhibition running at Manarat Al Saadiyat on Saadiyat Island until towards the end of July and which presents important art works from the Louvre Abu Dhabi permanent collection, some of which have never been seen, or revealed, before,” said Al Muhairi expanding on some future plans.