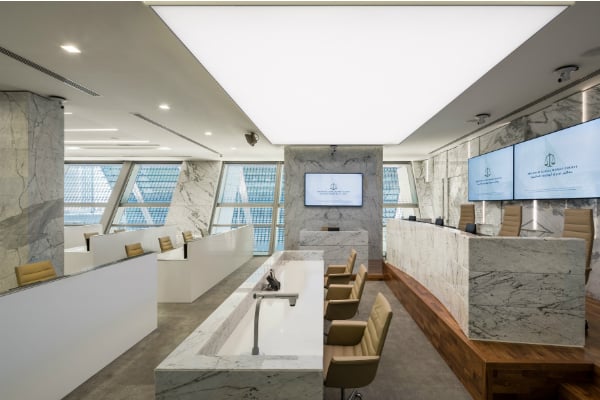 Abu Dhabi Global Market (ADGM) has launched what is claimed to be the world’s first fully digital courtroom.

The new courtroom comes under plans to establish ADGM Courts as a leader in digital judicial services after the launch of its eCourts online platform earlier this year.

Combined with the suite of technology and software in the digital courtroom, the organisation said it would facilitate more efficient and streamlined court proceedings.

“This initiative is one of ADGM Courts’ undertakings in support of Abu Dhabi’s vision to foster growth and expand the region as a commercial and financial hub through technological innovations,” said minister of state and chairman of ADGM Ahmed Al Sayegh.

‘”The introduction of the unique digital courtroom reinforces ADGM’s contribution to providing an open, progressive and international jurisdiction for businesses and investments to flourish with certainty.”

Among the courtroom’s capabilities are paperless hearings, remote access to digital court files and electronic case filing and management. The court also has live video and audio technology and is expected to increase the efficiency and reduce the cost of proceedings, according to the announcement.

“We have focused on the design, functionality and capabilities to achieve the ideal balance between technological integration and user interface,” said ADGM chief justice Lord David Hope of Craighead.