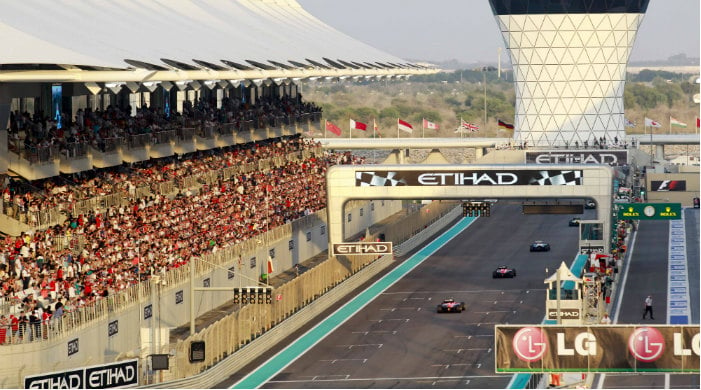 Over 90 per cent of the tickets for the upcoming Formula One Abu Dhabi Grand Prix are sold out, organisers Yas Marina Circuit have confirmed.

Tickets have already sold out completely in some categories including The Lounge North, Abu Dhabi Hill and West Grandstand.

“The introduction of a celebrity chef, Jean-Christophe Novelli creating a bespoke menu, with the added bonus of F1 legend Mark Webber on hand to meet and greet guests in the Marsa Boxes has driven strong sales activity,” a statement said.

Overall, organisers are confident that they will soon sell out all the 60,000-seats for the three-day event, which takes place from November 27-29.

“We have seen high demand for this year’s race already, and are down to our final 10 per cent of tickets available across the all packages,” said chief executive officer of Yas Marina Circuit Al Tareq Al Ameri.

“Our corporate offering is even stronger than last year’s and we are seeing the enhanced packages doing really well with both local and international audiences.”

Preparations are ongoing with the final maintenance programmes on schedule to accommodate the 60,000 visitors who are expected to come from over 170 countries, organisers said.

All the public areas are undergoing a facelift, with pre-build work on Oasis areas already started, as well as landscaping and other cosmetic improvements.

Abu Dhabi, which was included in the F1 calendar in 2009, hosts the season’s final race. While Mercedes driver Lewis Hamilton has sealed the driver’s championship this year, Sebastian Vettel and Nico Rosberg will be vying for second place.

Apart from the races, the event also has a strong entertainment line-up planned with singers Florence and the Machine, Enrique Iglesias and Blur performing at the concerts this year.