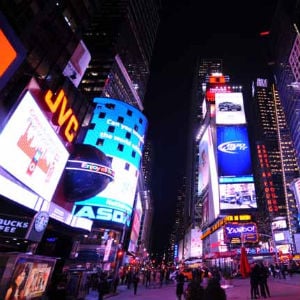 In a major tourism push, Abu Dhabi will occupy prominent space at New York’s Times Square for one week from May 16-19, it said in a statement.

The emirate’s Abu Dhabi Tourism & Culture Authority (ADTCA) will set up a 60 ft x 40 ft tent in Times Square, which is intended to “transport visitors to the city.”

“Our aim is to take the taste, sound, sight, touch and scents of Abu Dhabi to one of the centres of New York’s action,” said Mubarak Al Nuaimi, International Promotions Manager, ADTCA.

“In the ‘taste’ area, which will look like a traditional majlis, visitors will get to sample our traditional coffee and dates and attendants will explain the hospitality culture found in the Emirati home and business,” he said.

“In the ‘touch’ area there will be falcons on display and visitors will be able to pose for photographs with them and their trainer and there will be a henna lady to ‘paint’ designs onto visitors’ hands,” he added.

The ‘scent’ area will mimic a traditional perfume shop and the ‘sight and sound section’ will include music from Abu Dhabi and a video depicting the future of the emirate, he said.

On the first day of the event, the emirate will also advertise on the massive billboards surrounding the square.

“We anticipate making quite an impression,” said Al Nuaimi. “Abu Dhabi will certainly have its name up in lights in the US that evening,” he said.

Select NYC taxis will also have Abu Dhabi branding and destination video playing on their screens for a month, he added.

Times Square is one of the busiest areas in New York, and an estimated 1.6 million pass through it everyday.

The event marks the launch of ADTCA’s New York office, while Etihad Airways is also celebrating the fifth anniversary of its services out of New York City.

Around 21,566 US nationals stayed in Abu Dhabi’s hotels and hotel apartments during the first quarter of this year, ranking the country the emirate’s fifth largest international source market, said the statement.