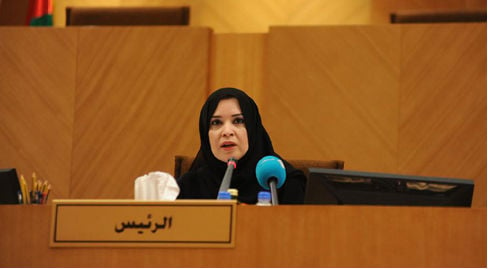 Amal Al Qubaisi, a Federal National Council (FNC) member and the new general manager of Abu Dhabi Education Council (Adec), was also the first woman to be elected to the FNC in 2006.

Al Qubaisi, 43, is an architect by profession and was the Emirates’ first female to chair one of the meetings at the FNC.

The FNC member has also been a powerful advocate of women’s issues and has urged the council to look into matters such as longer maternity leave and earlier retirement, according to local daily The National.

Al Qubaisi was also known to strongly support a 2010 Federal Supreme Court ruling, which gave women the right to travel abroad with their children even if their husbands objected to them doing so.

“I saw a dream that is well-deserved for women, which Sheikha Fatima bint Mubarak [wife of the late President Sheikh Zayed] has called for years – since maybe 1995 – for women to be members in the parliament,” the newspaper quoted her as saying in her address to the FNC during the first meeting she chaired.

“And today we are found not only in the council but in a high percentage, and [a women] is also in a leading role in the council and exercises her right to head a session. Today, Emirati women are a model for Gulf or Arab women.”

In a bid to empower women, many Gulf countries have begun appointing women to their legislative bodies.

In September 2011, Saudi Arabia’s King Abdullah issued a decree permitting female members to the Kingdom’s powerful Shoura Council from its next term. The decree also allowed them to vote and contest municipal elections from 2015.

Kuwaiti women gained the right to vote and stand for official positions in 2005 following years of campaigning for the cause.