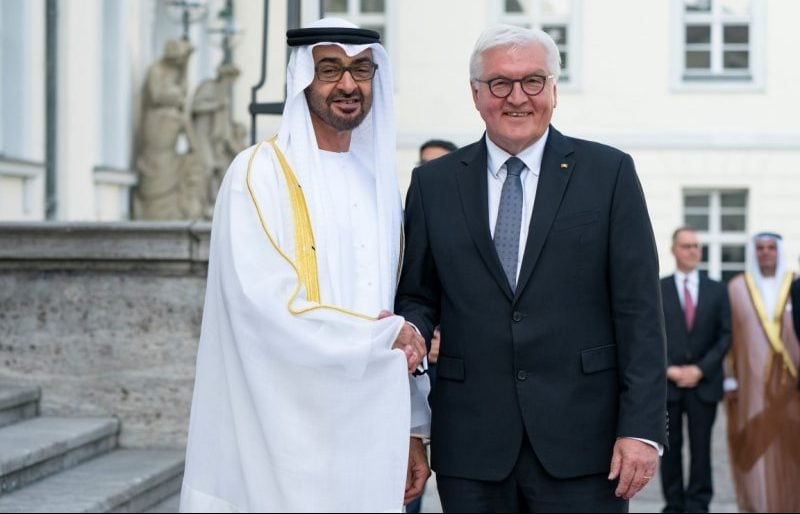 He met with German President Frank-Walter Steinmeier at Bellevue Palace in Berlin on Tuesday and the two leaders discussed ways to enhance cooperation bilateral ties.

Sheikh Mohamed stressed that the UAE and Germany were “partners in the drive toward boosting tolerance and co-existence among all peoples of the world”, official news agency WAM reported.

Mohamed bin Zayed arrives at Bellevue Palace in Berlin, where he and his accompanying delegation are received by HE Frank-Walter Steinmeier, the German President. pic.twitter.com/pqQMaWpnsP

“The UAE attaches special importance to its relations with Germany and is keen on enhancing ties between the two countries, especially in the areas related to economy, technology, innovation, scientific research, among others,” he said.

The Crown Prince of Abu Dhabi emphasised that relations between the UAE and Germany are not limited to political, economic and technological fields, but also extend to cultural and educational areas.

I met with President Frank-Walter Steinmeier at the start of my visit to Germany today. Two friendly nations that share hopes and aspirations for global peace and security, both instrumental in securing sustained development and prosperity. pic.twitter.com/F1BrVbuKCd

During the trip, Sheikh Mohamed will also meet with German Chancellor Angela Merkel as well as senior officials and representatives from German companies.

The visit comes soon after German foreign minister Heiko Maas visited the UAE prior to his trip to Iran.

The two countries established diplomatic relations in 1972, and have developed a strategic partnership since then.

The UAE is Germany’s top Arab trading partner, accounting for about 22 per cent of all Arab-German trade. Germany is also the largest European trading partner of the UAE.

Hundreds of German companies operate in the UAE, while 14,000 German citizens live in the country. Annual visitor numbers from Germany exceed 500,000.

Germany is also participating in Expo 2020 Dubai, investing roughly 50m euros on its pavilion. Spread across 4,500 square metres, the pavilion will be one of the largest at the expo.

Designed to showcase knowledge, research, and communication, the ‘Campus Germany’ pavilion will review the latest German innovations in technology and science.