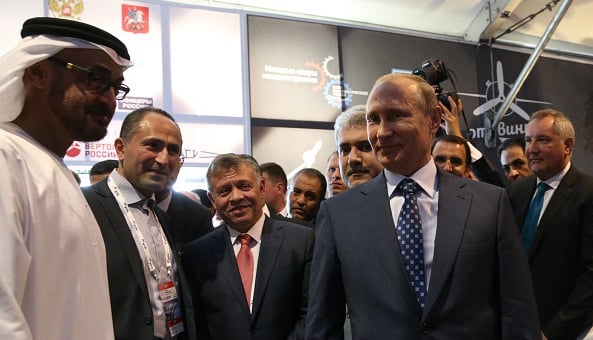 Sheikh Mohamed said: “Bilateral relations [between the United Arab Emirates and Russia] have grown in recent years, thanks to the support of leaders from both countries who cherish a comprehensive vision for the future of our relations, especially in the areas of economy, industry, trade and investment through empowering competent institutions in both countries to discharge their duties in this respect.”

He noted that the UAE aims to establish “better ties with friendly countries and strengthen co-operation with Russia to build a better future for political, economic, investment, trade and energy relations.”

During the meeting, the two sides also discussed political and security issues, views on counter-terrorism, safeguarding regional peace and security and backing the legitimate government of Yemen.

Sheikh Mohamed and Putin specifically reviewed the efforts being exerted to settle the Syrian conflict and to come up with a solution that ensures the security and stability of the country and the region as well, WAM reported.

Russia supports the government under Syrian President Bashar Al Assad, while the UAE – along with the other Gulf Cooperation Council countries – has called for Assad to step down.

As part of the official visit, Sheikh Mohamed also attended the International Aviation and Space Show, MAKS 2015, on Tuesday.

Russia is seeking more investments from the UAE as it looks to develop its infrastructure and expand its economy.