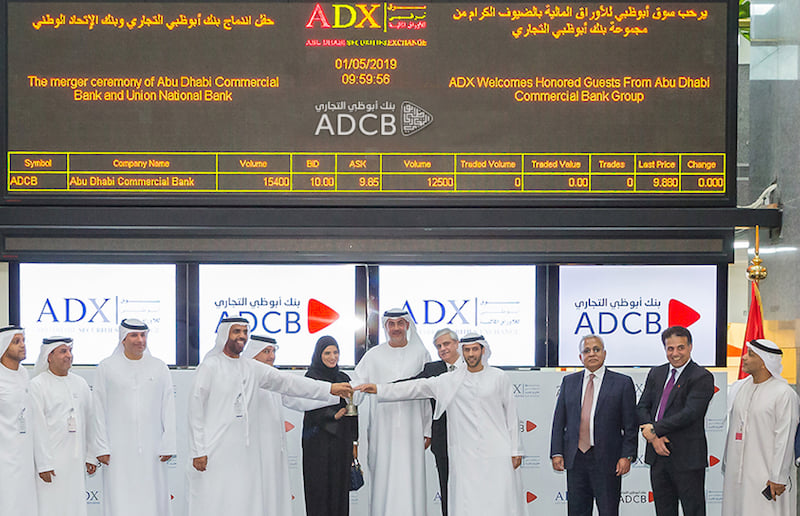 The enlarged ADCB Group, with Dhs423bn ($115bn) in assets and over one million customers, is now the third-largest lender in the UAE, accounting for a 21 per cent market share of retail loans as at December 31, 2018, a statement said.

The new banking group now trades on the Abu Dhabi Securities Exchange (ADX) under the ticker of ADCB, with 60.2 per cent ownership by the Abu Dhabi government through the Abu Dhabi Investment Council.

UNB has been dissolved as a legal entity and its shares have been delisted.

Al Hilal Bank retains its existing identity and continues to operate as a separate Islamic bank and will focus on offering Shari’ah-compliant retail banking services within the ADCB Group.

“Planning for the integration of the three banks is progressing well, with integration of operations and customer experience set to accelerate in a phased approach from the second half of 2019,” the statement said.

System and process integration will largely take place behind the scenes, with “minimal disruption” to customer service, it added.

In a message to staff, Al Suwaidi, said: “We have an experienced and dedicated management team, who have a clear direction for the bank and will lead us capably towards our goal of long-term, sustainable growth. This is the beginning of a new chapter in our shared story.”

Eraiqat added: “In today’s financial industry, scale is vital for us to operate successfully and achieve our goal of sustainable, long-term growth. This merger creates a resilient banking group with the capacity to invest in our mission to provide excellent service for our customers in our core market, the UAE.”

The merger is expected to lead to at least 500 job cuts, sources told Reuters in January with UNB and Al Hilal seeing the most redundancies.

The latest merger follows the combination of National Bank of Abu Dhabi and First Gulf Bank in 2017 to create a lender with $175bn of assets.

The UAE Banks Federation said in an annual report released in late August that the sector was still ripe for consolidation given the large number of lenders serving the country’s 9.54-million population and the pursuit of cost savings.

There were 22 national banks and 27 foreign banks operating in the UAE as of December 2017, according to the federation’s report.

Last year, reports also emerged that that the Sharjah government was weighing a merger between United Arab Bank (UAB), Invest Bank and the Bank of Sharjah to create a lender with about Dhs66.2bn ($18.0bn) in assets.

However, the banks later denied the plans.