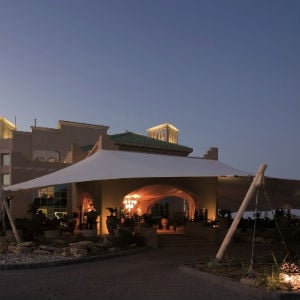 The fact that the five-star resort is only accessible by private ferry acts as something of a portcullis, as well as an excellent point at which to switch off your smartphone for the weekend and, if nothing else, start recovering from your three-hour drive (from Dubai towards Saudi) to the jetty. Cruising across the water to Sir Bani Yas, it’s possible to spot dolphins as they breach the water’s surface.

A short 15-minute drive across the island in a minibus winds around the nature reserve, where sand gazelles, peacocks and the odd (harmless) escapee saunter along the roadside leading up to the hotel. Like a mirage, it appears on the horizon and though its sandy exterior is at first unremarkable, what lies inside should impress even the weariest traveller.

The entire property is furnished liberally with quirky artefacts and trinkets from across the globe, while the high ceilinged reception is lined with sumptuous oversized couches. By contrast, Desert Island Resort’s two restaurants are simply designed, but cater well to the intimate 64-room property’s guests’ needs.

A popular spot with families, couples (the hotel’s beach and ‘dine by design’ service has seen several proposals) and even corporate trips, the resort offers an all-day dining buffet at The Palm as well as higher-end a la carte fare in the seafood restaurant Samak. The latter has its own salt guru – the first Gulf Business has encountered in the UAE – and it’s a nice touch.

Each of the rooms in some way features a nod to the resort’s wildlife theme, from sand and ivory hues mirroring the colours of the Arabian Oryx to the odd antler shape here and there.

And even the most basic of the hotel’s accommodation could hardly be described as that – sprawling beds, rain showers and wide-screen televisions are standard – while the luxuriously appointed private villas have their own gardens, pools and living rooms. All of this will leave you in little doubt as to why they are so popular with visiting sheikhs and sheikhas from both the UAE and the wider Middle East.

Don’t miss out on the safari excursion around the nature reserve. Sitting in an open-sided 4×4 you can witness the daily life of animals such as sand gazelles, Oryx, ostriches, giraffes and even cheetahs. Sitting on a hill overlooking one of the largest remaining herds of Oryx in the world doesn’t fall far short of remarkable, and undoubtedly gives Desert Island Resort the edge. Start familiarising yourself with the ‘off’ button on your Blackberry – now.