A Night Out At Armani - Gulf Business 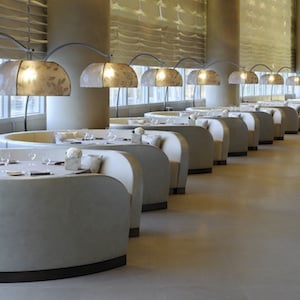 My first Armani/Ristorante visit was also my first experience of the Armani Hotel at the base of Dubai’s Burj Khalifa.

The Dubai hotel is Giorgio Armani’s first foray into hospitality and on first impressions the building is very much on brand.

Its sleek minimalist lines and classic, understated decor mingle with an army of sharply dressed staff who appear from all angles with military precision.

The restaurant itself is unusual. The oatmeal-coloured dining area is vast, high-ceilinged and open plan; depending on your preference, you could either feel liberated by sitting in so much space, or you could feel as if you are eating in a corridor.

As with anything Armani, the restaurant exudes a sense of exclusivity. You wouldn’t want to turn up here anything less than impeccably dressed or you would feel out of place. This restaurant is for those who like high-end, formal dining only.

On the Monday night of my visit, the restaurant was quiet which gave us ample time to chat to the charming restaurant manager, Carlo Laiso. He informed me that nearly all of the restaurant’s cooks were Italian. A good sign.

In fact, most of the clientele at the restaurant were also Italian, another good sign.

We began our meal with beef Carpaccio and Culatello ham, respectively. The meat in both cases was wonderful, and the beef Carpaccio was particularly tender.

The treatment of the starters was inventive; the beef came with truffles. Parmesan and quail’s egg, while the ham was garnished with figs and a pomegranate granite. A refreshing combination.

This restaurant is known for its pasta and the chef’s special risotto with porcini mushrooms and Norcia truffle did not disappoint. The rice comes from Vialone Nano (Veneto in north eastern Italy). While risotto is not an easy dish to get right, the texture and flavours of this dish were simple and powerful.

For the mains, we chose the grilled Angus beef fillet and the herbs confit lamb saddle. The dishes were superbly presented and, again, the quality of the meat was outstanding, as was the cooking.

We rounded off our meal with the restaurant’s very original dessert – the Sphere, a ball garnished with vanilla mousse, lemon crumble, violette creme brulee, cassis sorbet, and gold layers.

The manager says they took the Sphere off the menu as it’s a time-intensive pudding, but it is now back due to popular demand. I can see why. It’s scrumptious and unusual.

Overall, the surroundings are somewhat clinical and the service is very formal, and sometimes overdone. What makes this restaurant special is the food, which has clearly been touched with genuine Italian passion.