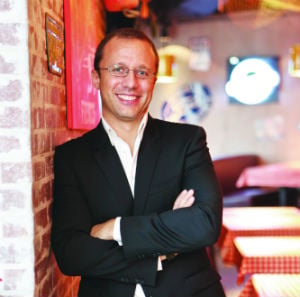 “Where else in Dubai are you going to go that has great food, awesome drinks, a live band, juke boxes playing music from Bob Marley to hip-hop to country and when that’s all over, you end up on a mechanical bull in the middle of the restaurant?”

I struggle for an answer which, perhaps, is why Downtown’s latest venue, Claw, has managed to hit the ground running in the middle of Dubai’s summer; there’s nowhere else like it in the emirate. And they don’t really cut off your tie.

“It’s just a lot of fun. It’s southern hospitality, southern cooking, a BBQ crab shack-grill. It’s not pretentious, it doesn’t try to be anything it’s not. The whole thing is about being anti- cool, it’s about just going out and enjoying yourself.”

Despite not having officially launched yet — Thesslef, founder of holding group Whissle, promises me the September launch will be full of surprises — Claw has already attracted huge interest both in Dubai and further afield.

“We’ve been approached already from all over the region, the GCC to Africa to India, asking us to franchise which is nuts because we’ve just opened,” he tells me, obviously thrilled at the potential his most recent project has.

“We plan to open a lot more of them; we want at least two more in Dubai itself and one in Abu Dhabi and then we’ll do a fast franchise roll out. It’s a very scalable concept.”

Thesslef has been on the Dubai restaurant scene for several years, becoming something of a local celebrity in the food and beverage community. He’s the brains behind Okku, Riva and Sophie’s, with plans for two fast-food chains and a hotel business, along with opening another restaurant this year — a Spanish, Ibiza-style, roof terrace concept called Cielo.

If the Finnish entrepreneur was all you had to judge Dubai’s F&B industry on, you would safely assume it was thriving. But Thesslef doesn’t think so.

“I don’t think it’s doing as well as everyone thinks it is. There are a couple of operators out there who are doing okay, but a lot of people are still hurting.

“There are a lot of people are moving into the sector at the moment just taking brands from abroad, not paying any attention to whether they will fit into the market place or the customer.

“Some are trying to create stuff which is admirable but a lot of it makes no sense from a business point of view.”

Thesslef confirms that he thinks the sector is in the middle of a bubble, and he’s certainly been in the region long enough to know what happened the last time a bubble burst.

“I’m concerned, the industry is already massively saturated and from what I hear there’s 20 to 30 per cent coming right now to what’s already there.

“There are some big groups and some high-net worth individuals jumping into this sector and they’re just throwing money at it. I think they’re going to wake up with a headache.”

For Thesslef, the only headache I foresee him waking up with would be induced from one of his new restaurant’s cocktails.

With further openings for Okku and Sophie’s planned this year, forget claws, the Dubai restaurateur is sharpening his talons on the F&B market.