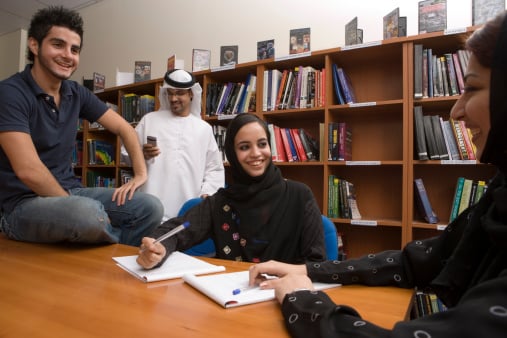 In the UAE, the cost of studying is equivalent to 51 per cent of GDP per person and an average of $27,375 per year including university fees and living expenses, the highest amongst the emerging economies.

That’s according to a study by HSBC, which also found that 84 per cent of students in the emirates choose a vocational degree compared to 60 per cent in the UK, USA and Canada.

Business and engineering are the two most popular university degrees for UAE students, despite the extra costs.

The study suggests the economic activity of a student’s country has a big effect on their choice of degree, with UAE students picking courses based on the skills required to meet the needs of boom sectors, as well as the promise of good careers and financial security.

Students in developed markets are more likely to pick a course which supports their ageing populations, such as medicine and nursing.

“As higher education increasingly becomes one of the most important investments people can make in their lifetimes, either for themselves or their children, they have to realise the importance of being financially prepared for this goal,” said Rick Crossman, head of Retail Banking and Wealth Management, UAE, HSBC Middle East.

“This is particularly pertinent in the UAE where we see a greater focus on vocational degrees, which require significant investment.”

The report showed UAE students also pick degrees offering the best return on investment; the costs of the three most popular university degrees – business, engineering and law – are more expensive than non-vocational courses.

“In order to be adequately prepared to pay for this, people need to plan early and start saving for the cost of sending either themselves or a child to university,” said Crossman.