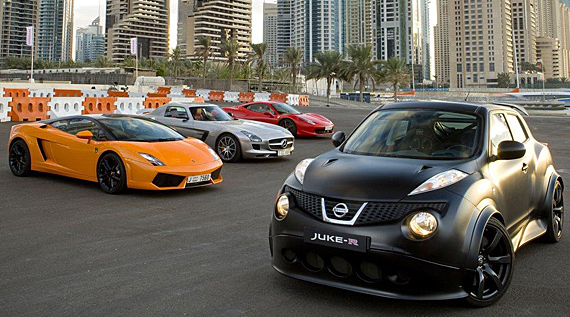 The Juke-R was first unveiled as a concept in 2011 and appeared earlier this year at a race held in Dubai. Reportedly, three people handed over $650k and the first production Juke-R, which is finished in white and features a plaque bearing “Juke-R #001”, is due to be handed over to a “high-profile and well-respected member of Dubai society.”

So what do you get for your money? Basically, it has the modified underpinnings of the Nissan GT-R supercar fitted under a muscular, re-sculpted Juke crossover bodyshell. The Juke-R also boasts “proper” GT-R performance specs as the twin-turbocharged 3.8-litre V6 rockets it 0-100km/h in 3.0 seconds and tops out at a limited 273km/h.

Financially-challenged petrolheads can wait for the Juke Nismo, which is rated at 197 horsepower and goes on sale next year. Alternatively, Nissan has announced that virtual versions of both the Juke-R and Juke Nismo will be featured in the upcoming mobile racing game Gameloft Asphalt 7: Heat.