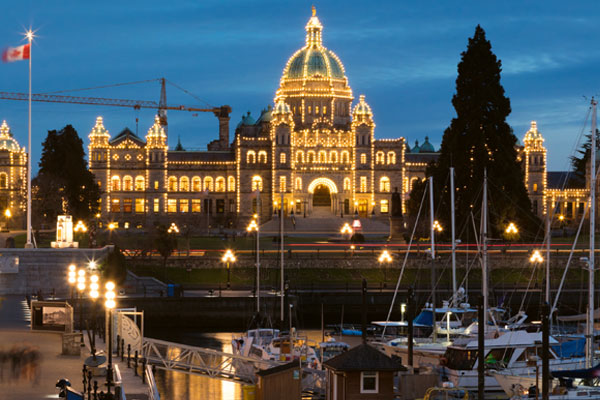 This compact, eminently walkable city, set amid the breathtaking beauty and bounty of Vancouver Island, is lauded as one of the world’s top small urban destinations.

Beyond the picture-perfect downtown waterfront, British Columbia’s capital is an exhilarating blend of cultures, from Canadian and First Nations to Chinese and European (especially British). There are three universities, thriving arts and cultural institutions, significant historic preservation, and a celebrated local food scene.

Read: GCC travel and tourism: An industry in transit?

The blocks north of the Empress and west of Douglas Street, including Chinatown, comprise the Old Town. Start at Bastion Square and Wharf Street, overlooking the harbor, where James Douglas founded Fort Victoria in 1843 as an outpost of the Hudson’s Bay Co. This area became the heart of commerce, industry and government, swelling in size after the 1858 Fraser Gold Rush drew thousands of immigrants.

Next to the Old Victoria Customs House is a grassy overlook with a display telling the history of British settlement and the indigenous Lekwungen people. Check out the lively Bastion Square pedestrian area of shops, restaurants and cafes, music and markets; then, on Government Street, browse through Munro’s Books, situated in a century-old bank, and founded in 1963 by the Nobel Prize-winning Canadian writer Alice Munro and her then-husband.

Detour through Trounce Alley (note the 125-year-old gaslights), then walk east on Fort Street to La Taqueria to snack on Mexican tacos amid festive music and colourful tiles. A juicy carnitas taco with pickled red onions and salsa is CA$3, or about $2.35, and a Baja fish taco with cabbage, salsa and chipotle mayonnaise is CA$6; wash it down with Mexican fruit soda.

6pm: On the waterfront

The Inner Harbour is where seaplanes, water taxis, kayak outfitters, whale-watching tours, restaurants and festivals can all be found. Sit under the trees and watch the boats and passers-by; then head to the chateau-style Fairmont Empress, one of several luxury hotels built across Canada by the Canadian Pacific Railway Co. at the turn of the century.

Don’t miss the Q restaurant and bar, with its coffered ceiling, gold and purple accents and portraits of Queen Victoria. An elaborate British tea is served daily in the spacious lobby.

The nearby majestic Parliament buildings were erected in 1898 to boost the capital’s profile after Vancouver became the railway’s western terminus. Open daily for touring, they are spectacularly illuminated at night. Thunderbird Park on Belleville Street is a quiet spot among the trees, where a regional First Nations house and totem poles were recreated by the Kwakwaka’wakw master carver Mungo Martin in the 1950s. 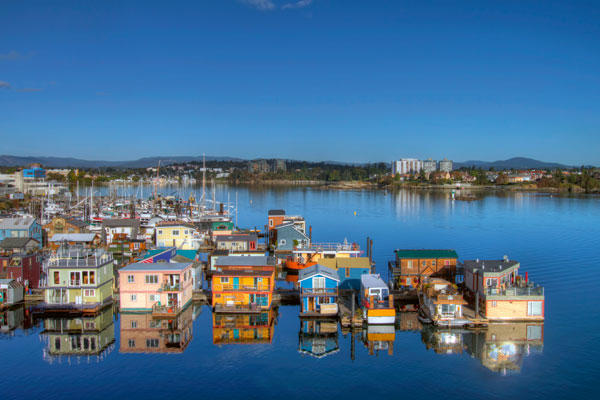 8pm: The art of dining

Stepping inside Little Jumbo feels like a warm embrace: The exposed brick, aged wood and glowing copper ceiling take you back in time. The restaurant, which has received accolades for everything from design to food and drinks, is a homage to two New York City saloon owners in the 1860s who championed the art of dining. Dinner for two — try the warm halloumi cheese salad, spicy Fernet-roasted nuts and grilled lingcod — including beverages, costs about CA$131.

Fol Epi bakery is known for its wild-yeast breads, made from milled-on-site organic flours and baked in brick ovens. Choose from an array of loaves, pastries and quiches, then think ahead to a packable lunch of sandwiches. Walk down Douglas Street to Beacon Hill Park: This 200- acre oasis is to Victoria what Central Park is to New York City. The landscape varies from manicured and natural gardens to forest, swampland, lakes, Garry oaks and camas fields (originally planted by the Lekwungen, who harvested the edible bulbs), and includes a children’s farm and a 127-foot totem pole. Great blue herons nest in the towering firs and peacocks strut; relax and listen to birds fussing and fountains gurgling.

Make time to tour the nearby Emily Carr House (CA$6.75) – the Victoria-born painter of forests and First Nations scenes spent her childhood gamboling in the park.

Read: The travel retailer of the future

This scenic stretch on the southern shore of the city, from Fisherman’s Wharf to beyond Ross Bay Cemetery, draws walkers, joggers, bikers and dogs. Have a picnic, clamber down to the beach or simply marvel at the water views and roadside homes. Start at Ogden Point, where interpretive kiosks tell about the Breakwater oaks. The tranquil gardens, with their several distinct outdoor ‘rooms’, were designed to harmonise with the rocky glacial outcroppings and native trees on the hilly property, which includes rock ponds (with mallards and turtles) and the 1950s modernist summerhouse and former home (now teahouse) of the couple whose love story started it all. Suggested fee: CA$10 (includes guide).

At the Art Gallery of Greater Victoria, seven modern gallery spaces adjoin an 1889 mansion that once served as the museum. On permanent display are works by Emily Carr and an impressive Asian collection and garden — second only to that of the Royal Ontario Museum. There are amber and ivory carvings, a Japanese Shinto shrine and a Chinese Ming dynasty bell presented to Victoria in 1903. Admission is CA$13.

The 19th-century gold rushes and Canadian Pacific Railway construction drew thousands of Chinese immigrants to Victoria, where they settled above Johnson Street. Today, Canada’s oldest Chinatown is a National Historic Site, a small, colourful (especially red, for luck), vibrant community of narrow streets and alleyways, shops and restaurants, beyond the resplendent Gates of Harmonious Interest. The Victoria Chinese Public School, built in 1909, is still used to teach Chinese language classes. Climb the stairs to the top floor of the Yen Wo Society building to see the oldest active Chinese temple in Canada, honouring the sea deity Tam Kung.

8pm: Down to Earth dinner

Sunday  9am: Brunch for breakfast

When it opened in 2016, Agrius garnered rave reviews for its organic, local menu. Now the restaurant serves brunch, with hearty buckwheat and rye pancakes, egg dishes (cured salmon scramble with fennel, capers and cream cheese), house- made lamb sausage, kale and mushroom Benedict, vegetable pâté, even fried oysters (CA$9 to CA$21). In fine weather there is pleasant outdoor seating along a pedestrian way.

11am: Royal BC Museum

You could spend hours in this stellar repository of natural and human history, with its singular collection of British Columbia First Nations archaeological materials, as well as provincial archives. The First Peoples gallery includes a totem hall and ceremonial house, an interactive language display and a collection of Argillite (black shale) carvings from Haida Gwaii, while the Old Town recreates period streetscapes and trades — a cannery, hotel, sawmill — even the 1790s ship quarters of George Vancouver. Admission: CA$17.

1pm: Drive up the coast

Beyond the cemetery, Dallas Road takes other names but continues along the dramatic rocky coast through neighbourhoods such as upscale Oak Bay, where you’ll find art galleries and British-style pubs and teahouses.

Stop at Willows Beach for a walk or a swim, then continue north past the University of Victoria to Mount Douglas Park. You can hike or drive up; either way, the panoramic view is remarkable: across Haro Strait to the San Juan Islands, toward downtown, or across rural Saanich.

In Victoria’s Old Town, two blocks from the harboir, the Best Western Plus at Carlton Plaza, with a gym and restaurant, is close to Chinatown and the Market Square shopping area. Rooms and suites, from CA$110; higher in season.

The Dashwood Manor Seaside Bed and Breakfast is a Tudor-style former mansion built in 1912 on Dallas Road and Cook Street. The 11 rooms and suites, appointed with period furnishings, all have ocean views; some have Jacuzzis and fireplaces. Rooms from CA$149; higher in season.