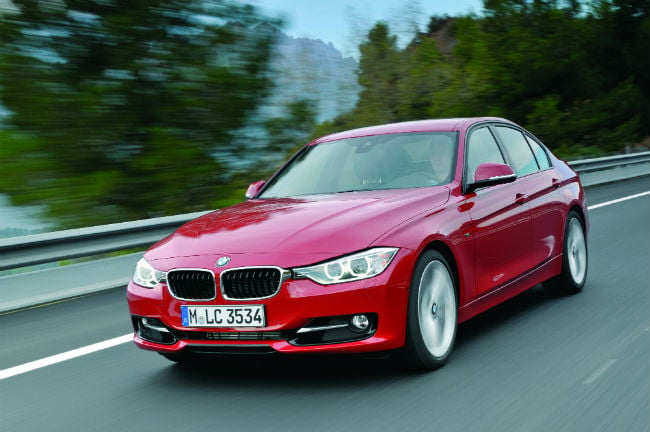 If BMW was to make only one car for the rest of its existence, it would undoubtedly be the 3-Series.

The manufacturer has sold over 12 million models in its near-40 year lifetime and this latest version carries the baton of a car held on the pedestal for many years as the bastion of what a sporty sedan should be.

What’s immediately different about the new model is its appearance. BMW has given it a minor face lift, extending the flat headlights to reach the newly designed kidney grille in the centre, while running bold contour lines over the bonnet.

Along with the lower-slung front end, which almost looks like its leaning forward, the new look gives a sportier, more aggressive appearance than 3-Series of old.

The car’s longer body allows the wheels to be pushed into the corners giving the car a 50:50 front to back weight ratio and a very low centre of gravity. The result is a beautiful feeling of the car sticking to the road, rooted to the tarmac no matter how hard you throw it into a bend.

Inside, new technology highlights include the Driving Experience control option; a selection of how hard or economical the driver wants to use the car. The standard ‘Comfortable’ setting with a two option bump up to ‘Sport’ and ‘Sport+’ disengages traction control and stiffens up the chassis while sending more power to the rear wheels. More appropriate to the modern, green world though is the ‘Eco Plus’ mode – helping to reduce your carbon footprint and save fuel for longer journeys.

The heads up display on the windscreen works well, and the the air-con is also brilliant – a small but necessary measure in the Gulf.

While they are the highlights inside the cockpit, the dashboard and main console feel overcrowded. There are too many buttons to push and options to press, especially with BMW’s traditional iDrive operating system planted firmly by the armrest, which, in all honesty, should be able to do everything. However, you don’t buy a 3-Series for its connectivity pluses.

The 3.0 litre twin-scroll turbocharged six-cylinder engine is by far the highlight of the car, producing 306bhp and making it a joy to drive. Maximum torque of 400Nm is available from 1,200 rpm and remains so up to 5,000 rpm, giving the car 0.3 seconds more speed than it’s previous model.

Paired with an eight-speed semi-automatic gearbox with all the power going through the rear wheels, the acceleration from a standing start and the torque while already travelling is hugely impressive. The steering too is sharp and responsive, as you would expect.

Away from the brute power, which simply is what makes this car so enjoyable, the 3-Series also possesses state-of-the-art safety features.

  The parking assist takes a new look with a birds eye view of the immediate surroundings as well as the usual reverse camera; a novelty which takes time to get used to but could be the favoured parking assist for some. The wing mirrors tilt when in reverse and warning lights flash when a vehicle’s in your blind spot.

Almost forty years on then and still the 3-Series sets the benchmark for mid-range sporty sedans. The M-Series will undoubtedly offer more horsepower and flashy badges like football stickers but will it be worth the extra money? Not in our eyes. The 3-Series punches above its weight, and does not fail to make you smile.