2016 to be significant growth year for Emaar - Alabbar - Gulf Business 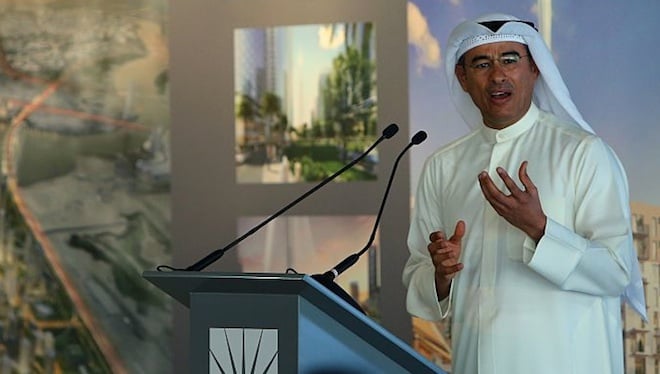 The chairman of real estate developer Emaar Properties has said 2016 will be a significant growth year for the company despite concerns surrounding the local economy and the property market.

Mohamed Alabbar’s comments were detailed in a release following the company’s annual general meeting in which it approved a cash dividend of 15 per cent, equivalent to Dhs 1.074bn ($292m). The company survived a late rebellion by shareholders to increase its dividend to 20 per cent.

“With all core sectors of the economy performing exceptionally well, and with the preparations for the Expo 2020 Dubai progressing in full swing, the coming years will witness healthy growth trends in Dubai that support all the three core businesses of Emaar – property development, shopping malls and retail and hospitality and leisure,” he said.

Earlier this month, Alabbar said that the company had not cut property prices in any of its projects despite a reported slowdown in the emirate’s real estate market.

Despite this, he told reporters at the AGM that he was “really scared” of market conditions coming into 2016 and admitted the company had cut costs, according to Reuters. But he said he was “pleasantly surprised” with the company’s performance in the first quarter.

An analyst at SICO Bahrain forecast the company will make a net profit in the quarter of Dhs 1.22bn, a 19.1 per cent year-on-year increase in earnings, according to the newswire.

Residential property prices in Dubai fell by an average of 10 per cent last year and could be set for a further dip in 2016, a report by consultancy firm Deloitte found.

“We are setting new benchmarks this year, particularly with the opening of Dubai Opera, a multi-format events venue in Downtown Dubai. Emaar has also rolled out the magnificent tower that will form the vibrant heart of Dubai Creek Harbour, a one-of-a-kind master-planned community that will further energise the city by welcoming visitors from around the world,” Alabbar said.

He added the company was developing prime real estate assets to meet the demand for residents in central locations, including expansions in its property portfolio in Saudi Arabia, Egypt, India and Turkey.

The company’s malls unit would gain further traction with the launch of the Retail District of the recently announced Dubai Creek Harbour project and the one million square-foot expansion of Dubai Mall, according to the chairman.

Alabbar also ruled out the floating of any more of Emaar’s business units this year due to turbulent market conditions, following the IPO of Emaar Malls in 2014.

Emaar has assets valued at more than Dhs 165bn and a land bank of 196 million square metres in the UAE and abroad.