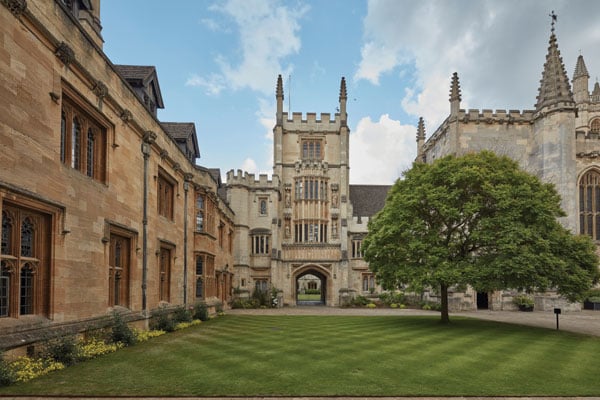 Over the centuries, the oldest university in the English-speaking world has had quite an influence on its namesake city, as even visitors here can attest. Wandering through Oxford’s ancient streets, over-hearing conversations in a marvelous spectrum of accents — about mathematics and music and the intricacies of Kurdish politics — it’s easy to feel the university rubbing off on you.

But there’s much more to Oxford than cloistered academia. With its idyllic natural setting, buzzing restaurant scene and dynamic industries in fields as diverse as publishing, healthcare and auto manufacturing (the Mini is made here), this more-than-1,000-year-old community on the River Thames is as lively, and lovely, as ever.

Shrunken heads. Spears. Blowpipes for poison darts. Sure, Oxford has plenty of somber art and artifacts to admire (for those, the Ashmolean is an excellent choice), but don’t skip the peculiar collections of Pitt Rivers, a Victorian-era museum beloved by locals for its vast array of curiosities culled from the farthest reaches of the British Empire, and beyond. Unlike most museums, Pitt Rivers organises its items not by age or origin, but according to each object’s function (playing cards from across the continents and through the ages, for example), inviting you to draw your own conclusions. Free entry, but donations encouraged.

It’s easy to walk right past Arbequina, a tapas restaurant that still bears the signage of the “dispensing chemist” that used to occupy this location on Cowley Road. But this small and unobtrusive spot, the sister restaurant to a wildly popular Thai place a bit farther out of town, is well worth seeking out. Find a seat among the young professionals perched along the sleek metal bar and ask the staff for their recommendations from the short-but-sublime menu of small Spanish savoury dishes. For dessert, order a slice of the tender-sweet almond cake, the Santiago tart (£5). Dinner with a glass of wine, about £20.

Climb the tower of the University Church of St Mary the Virgin (entry to the tower, £4) for the classic view of the city’s “dreaming spires,” then set off on a walking tour of the heart of Oxford academia. Admire the stately facade of the Radcliffe Camera; gaze up at the spectacular painted ceiling of the Sheldonian Theatre (entry, £3.50); snap a photo of the famously photogenic Hertford Bridge, better known as the Bridge of Sighs; then join a guided visit of the Bodleian, the university’s principal library. The tour (£6 for half an hour) includes a stop in the 500-year-old Divinity School, a vaulted space with a remarkably intricate ceiling that Harry Potter fans might recognise as the Hogwarts infirmary. Finish with a visit to the recently renovated Weston Library, where rotating (and free) exhibitions highlight modern and ancient treasures from the university’s immense collection.

It’s hard not to be inspired by all of that intellectual wealth, so pick up some reading material of your own at Blackwell’s Bookshop, which has been slaking Oxford’s unending thirst for books since 1879. It’s easy to spend an hour or more exploring the store’s three levels, including the rare books section on the top floor.

There can’t be many places in the world where you can enjoy an organic, locally sourced lunch in a room that’s nearly 700 years old, but Oxford is certainly one. The line at The Vaults and Garden might snake out the door in the summer, but it’s worth the wait, both for the food — fresh salads, curries, stews and baked treats; the menu changes every day — and the setting: the arch-roofed Old Congregation House, which dates from the 1320s. Lunch for one, about £12.

Locals still frequent Oxford’s Covered Market, open since 1774, to shop for produce, meat, baked goods and fresh flowers, but there’s plenty of enjoyable window shopping to do as well. Peruse the fascinators at The Hat Box; admire the local artwork on display at The Covered Arts; or peer through the large windows of The Cake Shop to watch the bakers labouring over their elaborate confections (and, for £1.90, pick up a cupcake to go while you’re there).

Founded in 1621 as a nursery for medicinal plants, Oxford’s Botanic Garden is the oldest in Britain. Today, the fragrant, shady corners of the Walled Garden make a welcome spot for an afternoon snooze, while the Lower-Garden displays on sugar cane, vanilla and other “plants that changed the world” will surely deepen your knowledge of horticultural history. Wander through the glass houses to find carni­vorous plants, ferns, cactuses and lilies from around the world. Entry, £5.45.

The University of Oxford comprises about three dozen colleges, academic communities in which students study, and often live and eat. The colleges — which range in age from roughly 30 years to more than 700 years — are sometimes open to visitors, who can tiptoe around the leafy quads, solemn chapels and dining halls as the students and professors go about their day. Christ Church College is popular with tourists, but Magdalen College — with its quiet cloister, large deer park and flowery water meadow — is equally impressive (entry, £6). At 6pm, make your way to the chapel, where you can hear the celebrated Magdalen College Choir take part in the evening service. (Services are held daily, except Mondays, in term time.)

Taking its name from the Lewis Carroll classic, which was written in Oxford, The White Rabbit serves high-end pizzas and beer to a good-natured crowd of students, locals and visitors. Order at the bar, grab a table and pull down a board game from the stack in the corner if you have some time to kill. It can get a little rowdy in the evening, but it’s all part of the fun. Dinner for one, about £15.

9pm: Music or a movie

Walk north to the Jericho Tavern, a laid-back neighbourhood pub that offers live music, tasty bar food and a good range of beers on tap. The rock band Radiohead — whose members met as high school students in Abingdon, just south of Oxford — played its first gig here in 1986, and the Jericho continues to feature up-and-coming groups as well as more established acts. For a mellower night out, go next door to The Phoenix Picture House, which offers an intelligent mix of mainstream movies and arthouse films (£11.60 per ticket).

10am: Out to pasture

Stretch your legs with a walk across Port Meadow, a wide expanse of grassland and wetland that has served as a grazing area for local livestock for at least 1,000 years. Keep an eye out for wild rabbits, wildflowers and water birds. After a couple of miles, you’ll come to the ruins of Godstow Abbey, a former nunnery founded in the 12th century. It was on a boat trip here to Godstow on a summer day in 1862 that Charles Dodgson — an Oxford mathematician better known by his pen name, Lewis Carroll — spun a wondrous tale for young Alice Liddell and her sisters, which he published a few years later.

Finish your walk in the handsome old village of Wolvercote. Here you’ll find Jacob’s Inn, where you can indulge in the beloved British tradition of a lavish Sunday lunch, complete with roasted meat and potatoes, a hearty portion of vegetables, crispy-soft Yorkshire puddings and plenty of red wine gravy to top it all off. Ask for a table outside in the garden, where you’ll find goats, chickens and pigs in among the parasols and potted plants. Lunch, about £20. You can hop on the bus back to town.

Jericho and Summertown are both friendly neighbourhoods within easy reach of the city centre. (Walk from Jericho, or take the bus from Summertown.) Airbnb apartment listings in both areas start from about £100 per night; cheaper options are available farther afield.

For the student experience, try University Rooms, which rents out empty rooms in Oxford colleges, ranging from £32 to over £100 per person per night. The service runs year-round, but as you might expect, you’ll find more options when classes aren’t in session.

For a splurge, try the Old Parsonage Hotel, which offers quiet luxury — a light-filled library,
a private garden, elegantly appointed rooms — a short walk from the centre of Oxford. A double room without breakfast in this hotel starts from £230 per night.