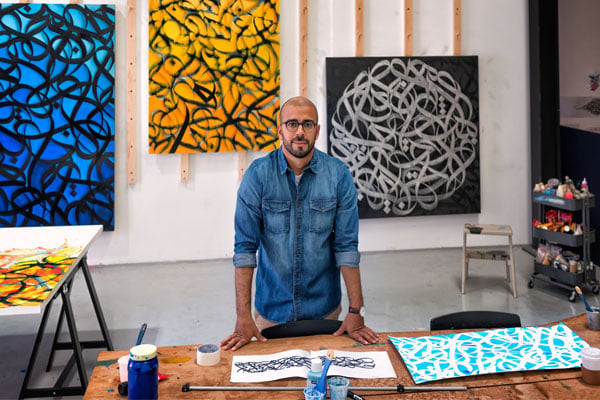 The Paris-born Dubai-based French-Tunisian artist eL Seed will bring his unique brand of calligraphy to London’s Lazinc gallery in his first UK solo show this month.

Titled Tabula Rasa, a Latin phrase for ‘blank slate’, the show consists of a series of new acrylic-on-canvas paintings where the calligraphy on it is a way for the artist to challenge and shift embedded preconceptions of Arabic script and culture among those that view his work.

The venue, Lazinc gallery, is an interesting choice for eL Seed. Lazinc is co-founded by the ex-agent of anti-establishment street artist Banksy whose work also challenges biases and ill-formed preconceptions.

eL Seed is better known for his street calligraphy – he calls it calligraffiti. His work can be found in galleries, institutions and public spaces in every continent of the world in locations as varied as the favelas of Rio de Janeiro and streets of Paris to the slums of Cape Town and the neighbourhoods of New York City.

In October, eL Seed launched his latest book, ‘Perception’ at the MoMA in New York. His work was singled out for praise by Glenn D. Lowry, Director of Museum at MoMA who described eL Seed’s multi-building public artwork in the impoverished neighbourhood of Zaraeeb in Cairo as “a metaphor for seeing what had been previously invisible; the dignity and richness of the lives of the Coptic community of Zaraeeb”.

Buried within all his calligraphy are philosophical messages with a social bent. Discover more in Mayfair this month.